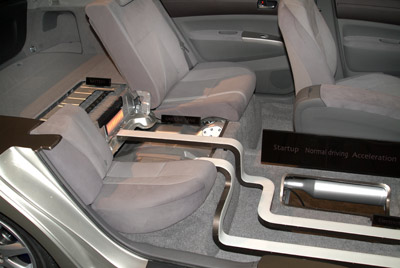 This cutaway car shows the location of the battery pack in a 2004 Toyota Prius, right behind the rear seat.
Car Culture/Getty Images

To understand why water doesn't bother the batteries or the motor in an electric car, first consider the fact that every car you've ever driven has had an electrical system. It operated at much lower voltages, used a different kind of battery and served a different purpose from the system in a hybrid car, but the principle is the same. All cars have batteries and electric systems, yet they don't short out or shock anyone in the rain. Even if you get water on the battery terminals, it generally just causes corrosion, not an immediate catastrophic effect. In fact, in several models, notably certain Chrysler vehicles, the 12-volt battery is mounted behind the front tire, near the bottom of the car, where it is frequently exposed to water and other road debris.

On the other hand, in some designs the battery pack is mounted near the bottom of the car. What then? Hybrid vehicles manufactured in the United States have a battery pack encased in a sealed metal shell. The shell is electrically isolated from current flowing from the batteries and usually covered in carpet or with an interior panel. Even though the shell is metal, if it does get wet, it's treated to resist corrosion.

In the event that water does actually get inside the shell, there's still not much to worry about. The nickel-metal hydride batteries used in current hybrids and electric cars are maintenance-free sealed cells, so nothing gets in or out. The chemicals inside are designed to form a gel, so they won't spill even if the batteries are ruptured in a crash. Under normal operating conditions, it's pretty much impossible for water to come into contact with the batteries themselves. The high-voltage lines that carry the current are similarly protected and insulated.

The bottom line -- don't worry about dodging puddles in your Prius.

For more information about hybrid and electric vehicles, batteries and other related topics, follow the links below.

Exposed on the Golf Course

Maintenance crews that work on electric golf carts -- which have battery packs placed in a more exposed position than on a road vehicle -- regularly hose down the carts to clear off grass, mud and other debris. Even this direct spray of water causes the batteries no real harm at all.