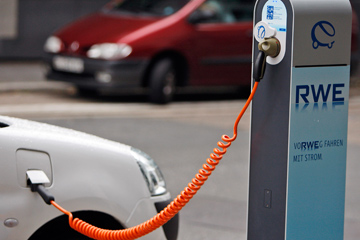 Many experts think that the 2010s will be the decade of the electric vehicle (EV), with hundreds of thousands of battery-powered cars appearing on the roads by mid-decade. These cars, trucks and SUVs will lack the internal combustion engines that have turned the wheels of most cars, even hybrids, for the last century. Instead, they'll use motors powered by an array of electric batteries, a form of energy considered cleaner and safer than fossil fuels like gasoline. Electric cars don't pollute either -- at least not at the tailpipe, and they don't necessarily deplete the Earth's remaining reserves of fossil hydrocarbons. Electric vehicles, in other words, are environmentally friendly and won't damage the planet we live on.

The major problem with getting drivers to adopt electric car technology is not that they have a limited range -- new technologies have greatly increased the distance that an electric vehicle can travel on a single charge -- but rather the awkwardness of recharging the battery array. Promoters of these vehicles like to reassure prospective buyers that they can simply install a small charging station in their garage and power up the batteries overnight by drawing electricity from the local grid. But a lot of people don't have garages. They live in apartments or small suburban homes and park their cars on the street or in massive parking lots. This leaves, by some estimates, about 80 percent of car buyers with no place to plug their electric car into the grid [source: Garthwaite]. Where are these people going to charge their EVs? And while most driving takes place within 25 miles (40.2 kilometers) of home, sometimes people like to take longer trips. Where will they recharge their EVs when they're out on the road?

The best presently available solution to this problem is the charging network. These are small charging stations no larger than a gas pump that are networked together. The stations can talk to one another and your car can talk to them too, via the Internet. This allows you to locate stations along your intended route and reserve them for your use. Once the infrastructure is in place, these stations will be available in private neighborhoods and along roadways, just where you need them. 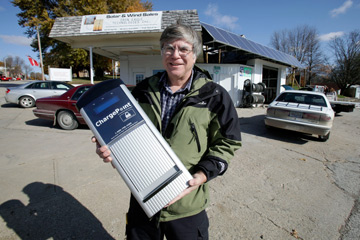 Mike Howard holds an electric-car charger outside his service station in Elk Horn, Iowa. Elk Horn has four of the devices ready to power up any electric vehicles that venture through western Iowa.
AP Photo/Charlie Neibergall

Imagine that it's five to 10 years in the future. You're in the driver's seat of your brand new electric car. It looks like every other car on the road, though perhaps it's a little more stylish looking. After all, it's brand new. You bought it not just because of its looks but also because it's cheap to drive -- the electricity isn't costing you nearly as much as gasoline used to -- and because it's non-polluting. You're on your way home from work and you're about to park the car for the evening. However, a meter on the dashboard tells you that the battery is running low. You'll need to power up before the car is ready for tomorrow's commute.

What do you do? There's no charging station at home in your garage because you don't own a garage. You live in an apartment or a small house. So, while stopped at a traffic light you pull out your Internet-enabled touch-screen cell phone (or use an interface built into your GPS) and surf to a familiar Web site. On the screen you see a map of the area around your home with red and green dots showing where the local recharging stations are. These stations are small boxes that sit next to the road like parking meters, waiting for you to park next to them. The red dots on the map represent charging stations that are already occupied. The green ones are free for you to use. You tap on the green dot that's closest to where you live and a box pops up asking whether you want to reserve that station for the evening. You press the button that says "Yes." The traffic light turns green and you drive off in search of the charging station, using the on-screen map to find your way.

Minutes later, you park. You pull your keys out of your pocket and wave the fob at a small box -- the charging station --next to the road. You proceed to drag an electric cable out of a recessed panel in the rear of your car, pop open a door on the charging station, and plug your car into a socket inside. Then you make the short walk home. When you get back to your car the next morning, the battery will be fully charged and ready to take you back to work or wherever you need to go.

The station you just plugged your car into is part of a charging network. You pay a monthly subscription fee to use the network and in return you get to plug your car into available chargers every evening. The recharging may take anywhere from 15 minutes to three or four hours, depending on the charging station and the type of battery in your car. Heavy duty batteries that can go hundreds of miles between charges will probably take longer to charge than light-duty batteries suitable for a short commute. But since you've timed things so that you won't need your car again until tomorrow morning, the length of the recharge doesn't really matter. And at the same Web site that lets you reserve the charging station, you can also decide what time your car will begin to charge. That way, you can take advantage of cheap, off-peak time electricity rates.

Sounds great, doesn't it? So what are the chances that you'll have a network of charging stations in your own neighborhood sometime in the near future? We'll talk about that on the next page. 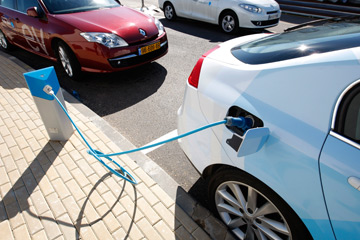 An electric car is connected into power supply at a recharge station during a demonstration of the California-based company Better Place in Tel Aviv, Israel, on Feb. 7, 2010.
AP Photo/Ariel Schalit

With the advent of charging networks, this is starting to change. Over the next few years, several countries, states and municipalities have arranged for the installation of thousands of charging stations in strategic locations and along popular routes. If you live in one of these areas, you may already be seeing these stations appearing on the roadside.

The United States Department of Energy has contracted with a number of companies to create something called the EV Project. The goal of this project is to build a recharging infrastructure in five states: Arizona, Washington, California, Oregon and Tennessee. These demonstration projects are intended to prove the usefulness of electric cars and will make use of charging networks installed by eTec, a subsidiary of the Arizona company ECOtality Inc. eTec makes the Minit-Charger, which can recharge light-duty batteries in as little as 15 minutes.

Other companies involved in creating charging networks are Coulomb (pronounced "cool-ohm") Technologies of San Jose, Calif., and Better Place of Palo Alto, Calif. Coulomb makes the ChargePoint Networked Charging Stations. They've installed networked charging stations in the San Francisco Bay area as well as Europe's first charging network, located in Amsterdam. Better Place (the name comes from the company's stated mission of making the world a "better place") not only makes networks of charging stations but it's also building battery switching stations where EV drivers can switch out battery arrays that have run low on power for freshly charged ones, a process that is substantially faster than using a charging station. Better Place is currently working on charging station infrastructure in Hawaii and California, as well as Denmark, Australia and Israel.

These projects have already begun, but are intended primarily as demonstration projects. Whether the infrastructure will be in place for your neighborhood is a completely different question. It depends on whether you live in an area where these companies will be installing networks. It may be 2020 before a substantial number of charging networks are available across the United States and even longer before the infrastructure for charging electric cars will rival what's currently available for refilling the tanks of cars that run on gasoline or diesel fuel.

For more information about electric car charging networks and other related topics, follow the links on the next page.