How the Jaws of Life Work 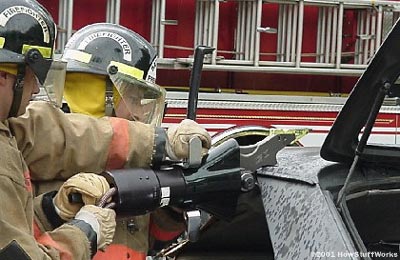 Driving down the interstate, you reach down to grab the road map from the passenger-side floorboard. In an instant, you inadvertently swerve onto the shoulder of the road, and your car flips as you attempt to regain control. When your car comes to rest, you've got a broken leg, your car is upside down and you're pinned underneath the dashboard. In this type of situation, rescue workers will use a set of tools commonly called the "Jaws of Life" to cut away the car and get you out.

The Jaws of Life is actually a brand of tools that is trademarked by the Hurst Jaws of Life company, but the name is often used when talking about other brands of rescue systems. The term "Jaws of Life" refers to several types of piston-rod hydraulic tools known as cutters, spreaders and rams, which are used to pry open vehicles involved in accidents when a victim may be trapped.

During emergencies, when a few wasted seconds can cost lives, the Jaws of Life are brought in to remove victims from the crashed vehicle. These devices are also used to extricate victims from collapsed concrete and steel structures after earthquakes. In this article, you will learn how these simple hydraulic systems work, the purpose of each device and how they're powered. 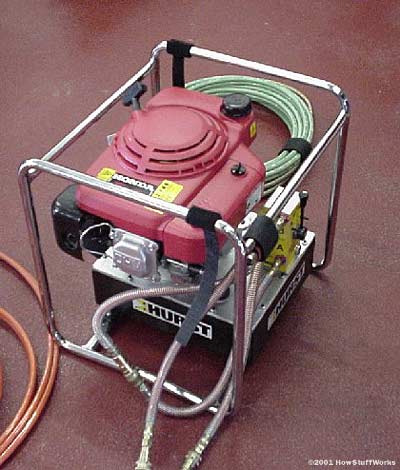 If you've read How Hydraulic Machines Work, you know that hydraulic equipment is based on a simple concept -- the transmission of forces from point to point through a fluid. Most hydraulic machines use some sort of incompressible fluid, which is a fluid that is at its maximum density.

Oil is the most commonly used incompressible fluid for hydraulic machines. However, the Jaws of Life equipment uses a phosphate-ester fluid, which is fire resistant and electrically non-conductive. At a crash scene, this type of synthetic fluid is favored over conventional oil.

In a simple hydraulic system, when a piston pushes down on the oil, the oil transmits all of the original force to another piston, which is driven up

In a simple hydraulic system, when one piston is pushed down,

another piston is pushed up.

The Jaws of Life equipment is some of the most unsophisticated hydraulic machinery, because there are very few parts involved in making the devices work. In the cutter and spreader, a portable engine pumps pressurized hydraulic fluid into the piston cylinder through one of two hose ports. A typical Jaws of Life machine uses about 1 quart of hydraulic fluid. An operator-controlled valve switch controls which port the fluid enters through. If it enters one port, the fluid forces the rod up and opens the arms of the spreader or blades of the cutter. The operator can then toggle the switch and cause the rod to retract, closing the arms or blades.

In the next two sections, we will take a closer look at the types of equipment that are generally referred to as the "Jaws of Life."

Our thanks to folks at the Bay Leaf Volunteer Fire Department, located near Raleigh, NC, for their help with this article. 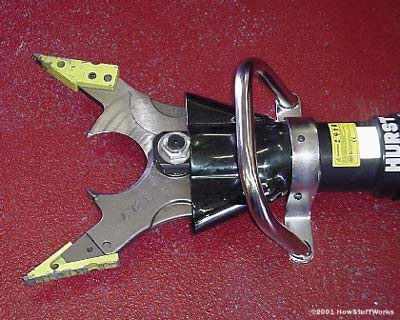 This combination spreader/cutter has its arms fully extended. Notice the cutter blades between the arms.

­­Spreaders and cutters are probably the two pieces of equipment that most people think about when they hear about the Jaws of Life on a news report. The powerful jaws of these machines can tear apart most vehicles like cutting through a tin can. The spreader is used to pull pieces of the structure apart, or it can be inserted into the side of the vehicle to tear a section out. The cutter, as the name suggests, is used to cut through the vehicle like a pair of giant bolt cutters. The mechanics of how these two devices work are very similar, and some Jaws of Life equipment combine the cutter and spreader into one machine.

A spreader consists of pincer-like, aluminum alloy arms with tips made of heat-treated steel to provide maximum strength for tearing into a vehicle or building. There are spreaders of different sizes, so the specifications differ as to how much spreading force the equipment possesses or how much space can be opened up on a vehicle. Let's look at the ML-32 Hurst Jaws of Life spreader as an example. This particular spreader provides:

Other spreaders can provide more or less spreading and pulling force. The body of the ML-32 spreader is made out of aluminum alloy and the piston and piston rod are made from forged alloy steel. When the portable engine is started, oil flows through a set of hydraulic hoses into the hydraulic pump inside the machine's housing. A typical power unit might be a 5-horsepower gasoline engine that operates at 5,000 pounds per square inch (psi), although the pressure differs in different power units. This type of engine can run on about 0.5 gallons (2 liters) of gas for about 45 minutes to an hour.

To open the arms of the spreader, the operator slides a valve switch that causes the hydraulic fluid to flow from one hose into the cylinder, pushing the piston and rod up. This rod is attached to linkages that are conjointly attached to the spreader's arms. When the rod pushes up, it causes the linkages to rotate, which opens the arms. To close the arms, the operator moves the valve in the opposite direction, which causes the hydraulic fluid to flow through a second hose.

The valve at the base of the spreader/cutter controls the flow of the hydraulic fluid.

To use the spreader, a rescue worker inserts the closed spreader arms into an opening in the vehicle or structure, such as a door jamb. The spreader can also clamp down on a structure to crush any material between its arms.

As you will see in the next section, cutters are very similar to spreaders in how they operate. 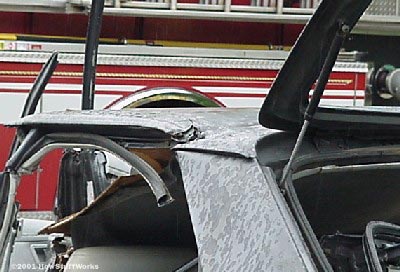 Cutters can be used to cut off the roof of a car. Notice the notch above the car door.

­ Like spreaders, cutters have a mouth that opens and closes. However, cutter­s are more like big chompers that bite through metal and other vehicle materials. If you've ever seen this device in action, you know that it can snap a car-door post like a twig in a few seconds. As the pressure comes down on the door post, the cutters just snap right through it.

Cutters typically have an aluminum-alloy housing with forged, heat-treated steel blades. The piston and piston rod are often made of heat-treated alloy steel. The cutters are used to cut or shear through materials such as sheet metal and plastic. Most often, they are used to cut through automobiles and other vehicles to free trapped passengers. Like the spreader, it can run off a gasoline-driven power unit. Jaws of Life systems can also be powered electrically, pneumatically or hydraulically.

Instead of arms, the cutter has curved, claw-like extensions that come to a point. Just like in the spreader, hydraulic fluid flows into a cylinder, placing pressure on a piston. Depending on the side of the piston that force is exerted on, the claws either open or close. When the piston rod is raised, the claws open. As the piston rod lowers, the claws of the cutter come together around a structure, such as a car roof, and pinch through it.

Cutters come in different sizes, but let's look at the Hurst Jaws of Life ML-40 model as an example. This particular model gives the operator:

If you understand the operation of the spreader and cutter, the ram is going to seem about as complex as a pair of scissors (if scissors had hydraulics, of course). The ram is the most basic type of hydraulic system: It's just a matter of using hydraulic fluid to move a piston head inside a cylinder to extend and retract a piston rod. If you look at some heavy construction equipment, like a backhoe loader, you'll notice that rams are used to control the boom arm.

This cutaway shows the internal components of a hydraulic ram.

In the image above, you can see that the piston rod that extends outside the cylinder is actually moved by a piston head inside the cylinder. There is fluid on both sides of this piston head, fed by two different hoses. If the force is greater on the blue side, the piston moves to the left; if it is greater on the orange side, the piston moves to the right. All you have to do to change the direction of force is stop pumping oil to one side and start pumping it to the other.

A ram can be used to push a collapsed dashboard forward to free a victim.

The ram's function is to push apart sections of the car (or other structure). For instance, a rescue worker can place a ram on the door frame and extend the piston to push the dashboard up, creating enough space to free a crash victim.

"This is what we call a dash bow up, where the steering wheel or part of the dash has come down on the patient. We would actually take that [ram] and roll that dash forward," said David Price of the Bay Leaf Volunteer Fire Department.

Hydraulics play an important part in many of the machines around us, but none may be as vital as the equipment known as the "Jaws of Life." These devices have been called upon to save thousands of lives in situations where a few seconds could mean the difference between life and death.

Are teens more likely to die in a car accident than adults?
Getting It Right When You Drive on the 'Wrong' Side of the Road
Top 10 Causes of Car Fires