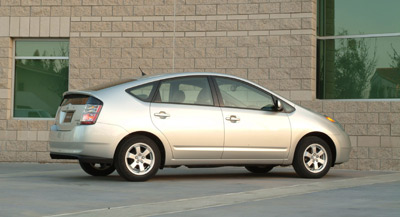 Hybrid cars like this Prius use powerful battery packs, but they're protected from the elements, so there's no risk of rain-related shocks.
Toyota/Getty Images

Both hybrid and electric vehicles use large, powerful battery packs to power electric motors. These battery packs generate much higher voltages than the 12-volt batteries in most cars. For example, the battery pack in the Toyota Prius runs above 200 volts, and other vehicles have battery systems capable of generating 300 or more volts [source: Toyota Prius Battery]. If someone were to touch the power cables or a short circuit somehow diverted power into a person, the voltage level would definitely be high enough to be lethal.

Auto mechanics and rescue workers do need to be aware of the risks and take proper safety precautions; however, this doesn't mean electric vehicles are any more dangerous than gas-powered vehicles. They're just dangerous in a different way. If it's been ruptured, a full tank of gasoline adds a great deal of danger to a rescue situation, just as a ruptured battery pack or exposed power line presents a risk. Most electric and hybrid cars have extensive safety systems that automatically shut off the power and isolate the battery packs when they detect a collision or a short circuit. Circuit breakers, often located in a compartment under the hood, trip and disconnect the flow of power in the event of an electrical surge or a short circuit. If a car is submerged in water, and some of that water gets into the electrical system, the circuit breakers trip. Even simply shutting down the car interrupts the flow of power from the batteries to the motor, so the high-voltage cables that connect them are left without power. For extra safety, the high-voltage cables are colored bright orange - a visual indicator to avoid contact.

There's one danger you might not expect from mixing water and electric cars together. If water comes in contact with the nickel-

metal hydride in the battery cells, the resulting chemical reaction forms hydrogen. If enough hydrogen builds up, it could cause disorientation and dizziness, and it could also lead to an explosion. This is really only an issue for rescue crews who have to deal with ruptured batteries, and they can easily handle it by properly ventilating the wreck.

So, now we know that electric cars are safe in an emergency situation if some basic precautions are taken. But could you get shocked or cause damage to the electric components by simply driving through a large puddle? To put it simply, the answer is no. Read the next page to find why.