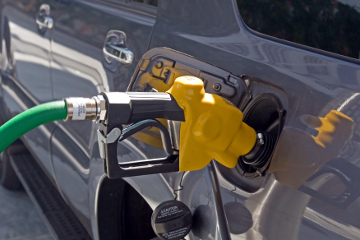 Flex-fuel vehicles run on different blends of fuels, most frequently a mixture of gasoline and ethanol, a type of alcohol. Want to learn more? Check out these alternative fuel vehicle pictures!
Hemera/Thinkstock

It's no secret the United States is trying to reduce its consumption of fossil fuels. A full half of them come from foreign countries, creating an undesirable dependency. Plus, they cause pollution. Lots of it. That's why American automakers and fuel companies are continually working on developing alternative fuels and vehicles that can run on them. The most popular alternative fuel today is E85, a mix of 15 percent unleaded gasoline and up to 85 percent ethanol. Vehicles that can be powered by this mix are called flexible fuel vehicles, flex-fuels or FFVs [sources: Goodspeed, FlexFuel US].

Flex-fuel vehicles have been produced since the 1980s, and come in dozens of models. According to the U.S. Energy Information Administration, there are more than 8 million FFVs rolling down America's streets and highways today. But surprisingly, many car owners don't even realize they're driving an FFV. The easiest way to tell is to look at your gas cap; most auto manufacturers began putting yellow caps on their flex-fuel vehicles beginning with 2008 models. You can also check for possible fuel door labels and badges on the body of your car, or check your owner's manual [sources: Alternative Fuels Data Center, Fuel Economy].

While FFVs are increasingly popular, they're not a miracle solution. The good news is they enable you, and your country, to consume fewer fossil fuels, as plant-based ethanol is a renewable energy source. It also burns much more cleanly, which is great for the earth and our health. But flex-fuels get fewer miles to the gallon than gasoline-powered vehicles, they can be pricier, and there currently aren't many gas stations selling E85 [source: Wiesenfelder].

The Mechanics Behind Flex-Fuel Vehicles

A flex-fuel car looks just like any other kind of car -- which is why some people don't even realize they own one. The main differences between the two lie with the engine and fuel system. Before discussing them, let's take a quick look at what fuels a flex-fuel vehicle.

Flex-fuels can run on regular gas, various ethanol blends and other types of fuel [source: Bionomic Fuels]. Ethanol is produced by fermenting plant sugars; in the United States, ethanol's plant sugars mainly come from corn, although sugar cane and other starchy agricultural products can also be used [source: Environmental Protection Agency]. The main ethanol blends on the market today are E85 and E95, which get their names from their compositions: E85 is 15 percent unleaded gas and up to 85 percent ethanol, while E95 -- typically used in diesel-powered vehicles -- is up to 95 percent ethanol [sources: Bionomic Fuels, Clean Air Trust]

Back to the mechanics. The internal combustion engine of a flex-fuel vehicle is designed to run on more than one type of fuel -- usually gasoline plus ethanol or methanol fuel, all of which are stored in the same tank [source: Chapman]. When you start driving, a sensor mounted in the fuel line reads the fuel blend -- the ethanol/methanol/gasoline ratio, or the fuel's alcohol concentration -- and sends a signal to an electronic control module. The electronic control module then adjusts the fuel trim, or the engine's fuel delivery control, to compensate for the different fuel mixtures [sources: Heisner, FlexFuel US].

Components that comprise the fueling system of flex-fuel vehicles are also crafted to be ethanol-compatible. If they weren't, ethanol's higher water content could cause rust to form and damage the fuel system from the inside out [source: Change2E85].

Despite these different components, maintenance costs for FFVs are generally the same as for other vehicles, and sometimes are even lower, since flex-fuels burn fuel more cleanly [source: FlexFuel US].

Whether flex-fuels will become the norm in the future remains to be seen. But at least alternative fuels and vehicles are being investigated.

I don't own a flex-fuel vehicle. But I do live near Iowa, a Corn Belt state and the source of much of America's ethanol. There are plenty of gas stations in the area selling ethanol. Make sure you don't put ethanol in a non-flex-fuel car. If you do so accidentally, empty your tank and refill it with regular gas and you'll be fine.