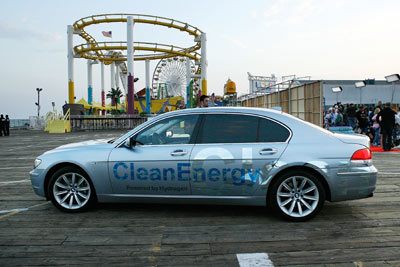 As we mentioned earlier, fuel cells and internal combustion engines can be fueled by hydrogen. The BMW Hydrogen 7, for example, has an internal combustion engine that can run on both gasoline and hydrogen. One very important distinction to make here is that the Hydrogen 7 runs on liquid hydrogen, which must be kept extremely cold. If it isn't, the hydrogen will turn into a gas, and as a gas, it will not be able to power the engine. The major modifications needed for running a car on hydrogen go to the fuel tank, not the engine. Keeping all that liquid hydrogen cold requires some serious technology.

Beyond that is the issue of engine tolerances. Car engines are built to run in specific conditions and with specific fuels. That's why putting a lower octane gasoline in your car's engine can cause a change in performance. The car may be able to run on lower octane fuel, but it's not ideal -- sort of like how you could survive on a diet of licorice, but not for long. Cars like the BMW Hydrogen 7 have engines that have been built to run on hydrogen, and sophisticated computer systems to monitor the engine and make sure it's operating optimally. Could someone convert their car's engine to run on hydrogen? Sure. After all, anything is possible -- not likely, but possible.

One more factor to consider is that even if you could power your car on hydrogen, where would you get it? Hydrogen fueling stations are few and far between. In the United States, Southern California has a just a few. It is possible to get a hydrogen refueling system for your home, but these systems tap into natural gas lines. The natural gas has to be converted into hydrogen fuel for a vehicle.

All things considered, it appears as though reliable hydrogen fuel technology is still a ways off. Hydrogen does promise a chance for a highly renewable resource to power vehicles and to decrease harmful emissions, yet there are some significant technological hurdles to jump before it becomes a mainstream fuel source. Automakers are in various developmental stages of fuel cell technology, and hydrogen-powered vehicles may be widespread soon; however, the much less credible "water-powered" cars will likely never come to the showroom floor.