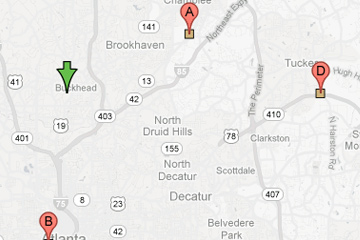 These are the points that turn up when you search for compressed natural gas fueling stations near HowStuffWorks headquarters on the U.S. DOE’s alternative fuels data center. When we searched at the time of publication, 558 CNG stations turned up in tot
Image courtesy Alternative Fuels Data Center/U.S. DOE

E-gas is just a marketing word for synthetic methane, the laboratory version of the same colorless, odorless gas derived from ancient land plants and aquatic organic matter that lies buried in the Earth's crust, above or below oil deposits. While fossil methane takes millions of years to form, synthetic methane comes to life relatively quickly by way of some basic chemistry.

Everything begins with electrolysis, a type of chemical reaction requiring an electric current to pass through a substance to effect a chemical change. In this case, the substance is water, and the change results in the decomposition of water molecules into hydrogen gas and oxygen. The chemical equation would look like this:

By itself, hydrogen could be a fuel for future cars. In these vehicles, hydrogen is compressed and stored in a large tank. Then the hydrogen reacts with oxygen to produce electricity and water. Unfortunately, fuel-cell vehicles require a more robust infrastructure before they become economically feasible. Until that time comes, Audi takes the hydrogen gas and reacts it with carbon dioxide in a process known as methanation. Here's the chemical equation for that reaction:

In this equation, methane appears as CH4, and it's no different than the swamp gas collecting above a bog or the natural gas extracted at a wellhead. It's just as colorless, just as odorless and just as flammable. More important, it can enter the existing natural gas network without any other modifications, which means it can be distributed to homes, businesses and compressed natural gas (CNG) stations. The auto industry is, of course, most concerned with the last item on this list, for CNG stations deliver fuel to a growing fleet of natural gas vehicles, or NGVs. NGVs won't solve all of our global warming or fossil dependency issues, but they might have a role in the transition. Up next, we'll review this aspect of the Audi solution.