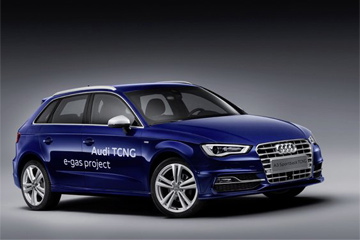 The A3 Sportback TCNG, which will run on e-gas. Want to learn more? Check out these alternative fuel vehicles.
Image courtesy Audi

For a while, many of us allowed ourselves to imagine the possibilities: highways and boulevards filled with zero-emission electric vehicles (EVs). We could see such a world, as Ray Bradbury, Isaac Asimov or Philip K. Dick might have imagined it, with fleets of glistening, battery-powered cars streaming through canyons of glass and steel. When Barack Obama promised, in 2008, to put 1 million EVs on the road by 2015, we thought our utopian dreams of the future would soon come true. And we had the all-electric cars to prove it -- the Nissan Leaf, the Tesla Model S and the BMW ActiveE.

But the EV concept has suffered from a certain fragility. Most electric vehicles have a limited range of just 100 or 200 miles (161 or 322 kilometers) on a single charge. And the lack of an extensive public recharging infrastructure makes it difficult to "fill up" when an EV's batteries run low. This has caused concerns among consumers who fear being stranded on the side of the road because they can't plug into the grid. As a result, EV sales have lagged. Only 52,835 plug-ins were sold in 2012, while only about 70,000 have been sold since December 2010. That means EV sales make up less than 1 percent of the approximately 15 million vehicles sold each year [source: Electric Drive Transportation Association].

Not surprisingly, some companies have shifted strategies. Although they continue to work toward a future of alternative fuels, they acknowledge a current internal-combustion reality. Not only that, they see the fossil-fuel economy as an opportunity to make a paradigm shift, instead of as an unfortunate fallback position. Audi is one of those companies. In 2013, the German car company will open the world's first industrial plant to produce something known as e-gas, a carbon-neutral fuel that can power compressed natural gas (CNG) vehicles, including, of course, Audi's very own A3 Sportback TCNG. At the same time, the e-gas project provides a model and an infrastructure to supply electricity for EVs and hydrogen for fuel-cell vehicles when both of those technologies mature into viable alternatives.

Sound too good to be true? Some people think so. Gas 2 blogger Christopher DeMorro wrote this about the e-gas project: "Maybe I am missing something here, but the problem right now is too much atmospheric emissions from automobiles. Merely sustaining the status quo won't do. Let's get off of the carbon standard as much as possible by focusing on vehicles that go further using less energy."

Before you agree or disagree, it might be wise to understand the full scope and scale of the e-fuel concept, starting with Audi's definition of carbon neutrality.