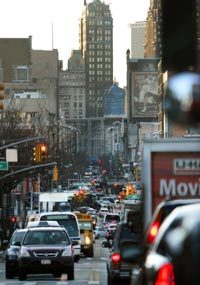 ­During the big oil crisis in the 1970s, European car companies started advertising diesel engines for commercial use as an alternative to gasoline. Those who tried it out were a bit disappointed -- the engines were very loud, and they would arrive home to find their cars covered from front to back in black soot -- the same soo­t responsible for smog in big cities.

Over the past 30 to 40 years, however, vast improvements have been made on engine performance and fuel cleanliness. Direct injection devices are now controlled by advanced computers that monitor fuel combustion, increasing efficiency and reducing emissions. Better-refined diesel fuels such as ultra low sulfur diesel (ULSD) will lower the amount of harmful emissions and upgrading engines to make them compatible with cleaner fuel is becoming a simpler process. Other technologies such as CRT particulate filters and catalytic converters burn soot and reduce particulate matter, carbon monoxide and hydrocarbons by as much as 90 percent. [source: Diesel Technology Forum]. Continually improving standards for cleaner fuel from the European Union will also push the auto industries to work harder at lowering emissions -- by September 2009, the EU hopes to have particulate matter emissions down from 25mg/kilometer to 5mg/kilometer [source: EUROPA].

You may have also heard of something called biodiesel. Is it the same as diesel? Biodiesel is an alternative or additive to diesel fuel that can be used in diesel engines with little to no modifications to the engines themselves. It's not made from petroleum -- instead it comes from plant oils or animal fats that have been chemically altered. (Interesting fact: Rudolf Diesel had originally considered vegetable seed oil as fuel for his invention.) Biodiesel can either be combined with regular diesel or used completely by itself. You can read more about biodiesel in How Biodiesel Works.

For more information on diesel engines and related topics, check out the links below.