Integral Jacks and the Engine 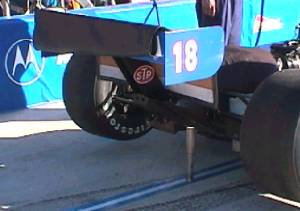 This is the rear jack. It extends from the body and lifts the car about four inches when activated with pressurized nitrogen.

One of the more interesting features built into a Champ Car is a set of three pneumatic jacks that are integrated into the chassis.

There are two jacks up front and one in the rear. By connecting a pressurized nitrogen hose to a port located behind the driver, the pit crew can jack the car up in less than a second when the car stops in the pit.

The integral jacks speed up the pitting process, reduce the number of people who have to go over the wall for the pit stop, and eliminate a piece of equipment that the crew would have to carry over the wall.

Behind the driver, from left to right, are the pop-off valve for the turbo (silver cylinder), the air hose connector for the jack and the fuel tank vent.

The engine is obviously a central part of a winning Champ Car. The engine must be powerful, lightweight and reliable. During a race, the engine is exposed to incredible stress, so the engine is replaced after every race. Engines are also replaced after a day of practice or a qualifying run. The Motorola team uses dozens of engines each season.

As described in the section on the chassis, the engine is also a part of the car's structure. The engine sits behind the driver, between the transmission and the tub that forms the cockpit of the car. It is the only connection between the front and back of the car. The engine is therefore called a stressed member, meaning that it carries load and is subject to mechanical stress. The level of stress that a Champ Car can exert on the frame is one more thing that makes the engine so critical to success -- the engine is, mechanically, the entire midsection of the car's structure!

The specs for the Mercedes-Benz engine that the Motorola team uses include:

A Champ Car engine is obviously very different from the engine you find in a normal car. Here are some of the things that make it unique:

The engine gives a Champ Car some amazing capabilities. For example, a Champ Car can accelerate from zero to 100 mph in about five seconds, and is still in second gear at that point! For comparison, a Corvette or Viper can accelerate to about 65 mph in the same amount of time.

All Champ Car engines use a turbocharger to improve their performance. The turbocharger pressurizes the air flowing into the engine's cylinders so that the engine can burn more fuel during each stroke. The extra fuel means extra power per stroke.

A Champ Car engine runs with a turbo boost of 40 inches (about 19 PSI). When the turbo over-pressurizes things, a pop-off valve releases the extra pressure.

The turbo, intake manifold, and pressure valve of an older Champ Car. The pop-off valve is simply a plate held in place by a strong spring. When too much pressure develops in the manifold, it pushes the plate up to release the pressure.
The manifold and valve in Motorola's car

Pop-off valves are now electronic. When they release, they are loud enough for the driver to hear, so the driver knows it is happening.

One of CART's more interesting roles is the certification and distribution of pop-off valves. Here is CART's description of the valves from the CART Web site:

To keep the playing field even (and the manifold pressures within the rules), CART provides each team with a manifold pressure relief, or pop-off valve, to put on top of their intake manifold. It's called a pop-off valve because it makes a loud pop when it lets off excess pressure. The effect is a sudden drop in horsepower. CART jealously guards these valves, and goes to great lengths to make sure they are both accurate and consistent. Each day of practice, qualifying and racing, CART officials pass out the pop-off valves to the teams and collect them in the evening.

Because of this relationship, the team actually has nothing to do with the engine beyond mounting it in the car, adding oil, installing the spark plugs and starting it up. If there is any sort of problem with an engine, the team replaces it with a new one and sends the old one back to be rebuilt.