Browse the article Are plug-in hybrids better than regular hybrids? 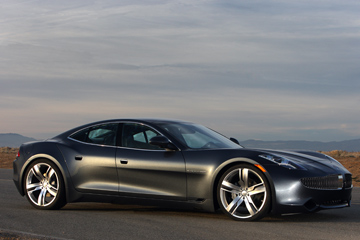 The push for more environmentally friendly and fuel-efficient vehicles is constantly driving engineers to reassess vehicle technology and come up with the most efficient way for cars to function. Hybrid vehicles are already a prevalent form of transportation, with more and more hybrid vehicle models being added every year. Some newer models are becoming more powerful, but at the expense of fuel efficiency. So what's the next step? How are manufacturers planning to produce even better fuel efficiency?

In plug-in hybrids, batteries power an electric motor which is used in place of an engine to move the car. Plug-ins do have gasoline engines, although they're much smaller than a typical hybrid engine and are only used to charge the vehicle's battery when its power is depleted. Because of their dependence on batteries, these vehicles are often called plug-in hybrid electric vehicles, or PHEVs. But are plug-in hybrid vehicles better than the typical hybrid cars on the road today or are they just a different form of fuel efficiency?

On the next few pages, we'll compare these two types of vehicles over three main categories to show some of the benefits of PHEVs compared to standard hybrids. We'll consider the convenience and environmental impact, as well as the operating costs for purchasing and maintaining each.

First, let's look at some of the factors that go into the operating costs of each type of hybrid on the next page.

Operating Costs of Plug-ins and Hybrids 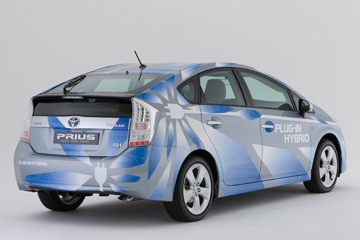 Like any new technology, costs are typically higher at first and then slowly go down over time. Plug-in hybrid vehicles are no exception. Although PHEVs already have all the existing technology they need to be mass produced and sold, one main factor causes them to be more expensive than traditional hybrids: the batteries.

There are two types of batteries that are typically used for standard and plug-in hybrids: nickel-metal hydride (NiMH), and lithium-ion (Li-ion). Li-ion, are the most efficient and can hold more electricity, but they are also the most expensive. Many hybrids, like the Toyota Prius and Honda Insight, use nickel-metal hydride batteries because of their charge capacity and cost effectiveness. Even though these popular hybrids both use NiMH batteries now, Toyota's 2012 Prius will be a plug-in hybrid with Li-ion batteries [source: Borroz].

With plug-in hybrids, the price of the car goes up because there are more batteries in the vehicle than in a traditional hybrid. A compact PHEV out of the box will cost about 10 to 20 percent more than a standard hybrid. For instance, a sedan will cost about $2,000 or $3,000 more and an SUV will cost about $5,000 more than a traditional hybrid [source: CalCars]. After the initial price, however, the PHEVs begin saving money on gasoline from day one. More batteries mean that the range of driving on fully electric power is extended, with most PHEVs getting around 20 to 40 miles (32.2 to 64.4 kilometers) on a single charge.

And while 40 miles (64.4 kilometers) may not sound like a lot, remember that the average driver commutes about 29 miles (46.7 kilometers) every day [source: Siegel]. That means that a driver could run the car all day, plug it in at night and be ready for his or her commute again the next morning. Battery prices are expected to fall as the technology improves and more car manufacturers buy batteries en masse. As gasoline prices steadily increase over time, PHEVs offer a good alternative and possibly even a cost-savings.

Go on to the next page to find out about the environmental impact of PHEVs and hybrids.

Environmental Impact of Plug-ins and Hybrids 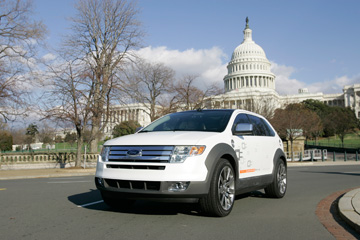 Some people have argued that recharging the PHEVs at night will put higher demands on power plants, and raise the amount of greenhouse gases because the plants will have to burn more coal in order to keep up with the demand. Although more power usage is likely with an increase in usage of PHEVs, the American power grid is consistently burning fuels cleaner than in the past and is constantly expanding into alternative energy sources. A study conducted in 2002 stated that the use of PHEVs using nighttime power to recharge would reduce greenhouse gases by 46 to 61 percent when compared with gasoline-powered cars [source: CalCars.org]. And a study conducted in 2001 by the Department of Energy found that a typical hybrid car reduces the amount of greenhouse gas emissions by 22 percent, while plug-in hybrids could reduce the amount by 36 percent [source: CalCars.org].

On top of a reduction of greenhouse gases, PHEVs potentially have the ability to emit near zero greenhouse gases by running on either biofuels or by recharging through rooftop photovoltaic systems, aka solar-powered systems [Source: CalCars.org]. Ethanol 85 (E85) biofuel would allow a PHEV to greatly reduce its petroleum usage, and recharging a PHEV with energy gathered from solar panels during the day would reduce the amount of power the car needs to take from the power grid.

Now that we've seen some of the environmental benefits of plug-in hybrids, we'll compare some of the convenience factors between the plug-ins and standard hybrids on the next page.

Convenience of Plug-ins and Hybrids 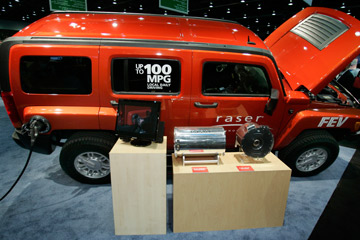 This plug-in electric Hummer H3 has a range of about 400 miles, driving its first 40 miles on batteries before turning on its combustion generator.
AP Photo/Carlos Osorio

Aside from the economical and environmental benefits of plug-in hybrid vehicles, could PHEVs be more convenient than traditional hybrids? One of the most obvious benefits of a plug-in hybrid would be that stops at the gas station would be minimized and possibly even eliminated altogether. For trips around town, back and forth to work and other short distances, drivers may not need to stop at the gas station at all; recharging the battery pack could be done overnight so the car could be ready to go in the morning, or quick charges could be accomplished in just a few hours. The ability to refuel your car at home would be a much greater convenience than having to stop by the gas station on your way to work.

On the flip side, standard hybrids have some convenience factors of their own. Standard hybrids only need to be filled up at the gas station before they can run their full range of mileage on their gasoline-powered engine. And because hybrids use regenerative braking to recharge their battery-assisted electric motor, as long as the car is running (and stopping), the batteries have an opportunity to be recharged. PHEVs can also recharge their batteries while driving, but because they use a smaller engine, a smaller gas tank and rely on the batteries as their main source of power, it's more efficient for the batteries to be plugged in to recharge. So getting the full range of mileage would require a two-step process: charging up the car before a trip and then filling up the gas tank. Once the batteries are depleted, the main source of power is gone, and the batteries will need a recharge from an electrical source. This leaves current-design plug-in hybrids at a slight disadvantage when it comes to longer trips.

Although plugging your car in overnight is more convenient than stopping for gas, if plug-in hybrid vehicles become a mainstream fixture in the automotive world, then recharging stations would need to be added to gas stations, homes and business. This change would require large investments from businesses that standard hybrids simply don't require, and that may be one hurdle that still stands in the way of PHEV development.

For more information about plug-in hybrids, standard hybrids and other related topics, follow the links on the next page.