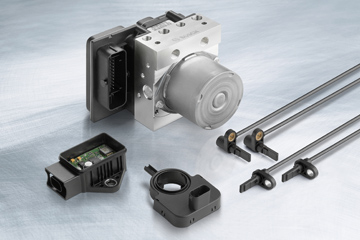 Driving safety has been a major focus of the automotive industry for many years. Car manufacturers have poured millions of dollars into researching safety and regulatory devices and the result has been an astonishing improvement in the safety of even the most inexpensive vehicles. It's easier now than it's ever been to find a car that will let you and your family ride in comfort and safety.

Quite a few of the new automotive safety technologies are based around computers, micro-circuitry that can sense what the car and its driver are doing and compensate for any problems that may threaten the well-being of the car and its passengers. Some of the most impressive safety improvements involve braking. The ability to stop a car in a safe manner is crucial in preventing accidents. Antilock braking systems (ABS) are now found in almost all cars, and with the addition of refinements like electronic skid control (ESC) these systems, along with an alert driver, can stop many accidents before they ever happen.

One of the most successful recent refinements to antilock braking systems has been electronic brake force distribution, or EBD. EBD is based on the principle that not every wheel needs to put forth the same effort into bringing the car to a stop.

How have automobile manufacturers achieved this minor technological miracle? And how important is it for you to buy a car with a state-of-the-art EBD system? You'll find the answers to these questions on the next few pages. 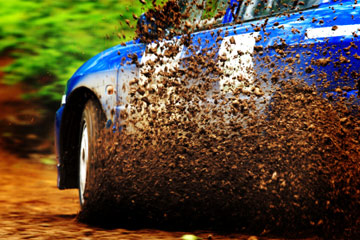 Friction between your car's tires and the road surface is critical for acceleration and braking, too.
©iStockphoto.com/Greg McCracken

Friction is also what keeps the car moving in the direction you want it to go. When we accelerate, we often take for granted that the car will move in the direction that the wheels are pointing; however, if there were no friction between the tire and the road the car could easily slip sideways and go out of control.

It's important for driving safety to maintain the friction between the tire and the road, yet there are a number of conditions under which this friction can be lost. One is acceleration on icy roads, as mentioned above, but friction can also be lost if you brake too hard. The forward momentum of the car can keep it moving at a speed significantly greater than the speed at which the tires are spinning. This is called wheel lock and it's a common cause of driving accidents. Once it happens, the tires no longer grip the pavement and the car continues to travel in the direction it was heading when the skid started.

When a car slows down, its weight shifts forward. In a front-engine car, the extra weight up front increases the grip of the front tires while it reduces the grip of the rear tires. This makes the rear tires more likely to lock up during braking. When the rear wheels slip, the car can begin to fishtail or even go into a spin. Traditionally, braking systems included a proportioning valve to allocate the correct amount of brake force to the front and rear tires. However, with ABS the proportioning valve no longer provides an ideal solution to the problem.

This is where electronic brake force distribution (EBD) comes in. With EBD, a computer called an electronic control unit (ECU) determines the slip ratio of each of the tires individually. If the ECU notices that the rear wheels are in danger of slipping, it applies less force to them while maintaining (or, if necessary, increasing) the force applied to the front wheels. EBD is also useful when the car is braking while driving around a corner. While turning, the outer wheels of the car rotate more quickly than the inside wheels. If too much brake force is applied to the inner wheels they can lock, causing the car to oversteer and go out of control. EBD can sense the slippage of the inner wheels and reduce the brake force on those wheels without reducing the force on the outer wheels.

How are these electronic miracles accomplished? On the next page we'll examine the hardware and software that an EBD system uses to individually control the amount of brake force applied to each tire. 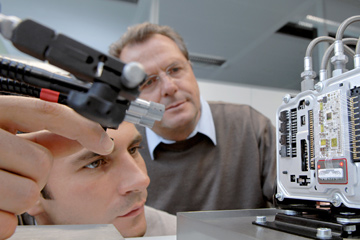 A precision laser is used at the Bosch engineering center in Abstatt, Germany, to measure the intrinsic vibration of a brake control unit.
Courtesy of Bosch

The safety and regulatory hardware used by an electronic brake force distribution system is much the same as the hardware used by an antilock braking system without EBD. It's just programmed differently. For the purposes of EBD, three different pieces of hardware are necessary: sensors that can determine the slip ratio of each wheel, valves that can modulate the amount of brake force that goes to each wheel and an electronic control unit that can calculate the amount of force required.

Brake force modulators: Brake force is applied to the wheels hydraulically, with brake fluid pumped into brake lines in such a way as to pneumatically activate the brake cylinders. The EBD system can modulate the amount of brake fluid going to each wheel through electrically actuated valves.

Electronic Control Unit (ECU): The ECU is a small computer embedded in the antilock braking system. It receives input from the speed sensors, calculates the slip ratio of the wheels, and uses the brake force modulators to apply an appropriate amount of force to keep the slip ratio of each wheel within a reasonable range.

Most EBD systems also include a yaw sensor, which detects the rotation of the vehicle as it turns. This can be compared with the angle of the steering wheel by using a steering wheel angle sensor to detect oversteer (too much rotation relative to the angle of the wheel) or understeer (not enough rotation relative to the angle of the wheel). EBD can then correct the steering by activating one of the rear brakes. For instance, if the car begins to understeer, the inner rear brake is activated to increase the car's rotation. If the car begins to oversteer, the outer rear brake is activated to decrease the car's rotation. The yaw sensor can also be used in conjunction with electronic stability control (ESC) to prevent rollover accidents.

How important is it for you to have a car with electronic brake force distribution? On the next page we'll look at how EBD helps you to drive safely. 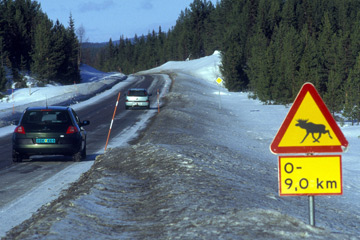 Driving on roads covered with ice -- or suddenly emerging elks -- are typical traffic risks in Northern Europe. Brake control systems such as ABS and the Electronic Stability Program (ESP) increase safety in these critical situations.
Courtesy of Bosch

Imagine you're driving down the highway at 50 miles per hour (80.5 kilometers per hour) and you see an obstacle in front of you -- a stopped car, for instance. You step on your brakes but there isn't room to come to a full stop before you collide with the car's rear bumper. In desperation you turn the steering wheel to one side to go around the stopped car, even while you're still pressing down on the brake.

What happens? Well, if your car has a traditional braking system, you might be out of luck. The shifting vehicle weight can cause the tires to lock, which reduces your ability to steer. You may find that you can't get around the obstacle in time. Or the car may oversteer and go out of control. With electronic brake force distribution, on the other hand, your vehicle's tires don't lock up and you retain the ability to steer. And the oversteer is prevented by maintaining the proper brake force to the inner and outer wheels. As a result, you're more likely to get out of this situation with your car intact and your passengers uninjured.

Now imagine that you're driving on an icy surface or a road slick with rainwater. Under these conditions it's really easy for your car to go into a skid. And although EBD cannot detect road conditions directly, it can deduce them from the slip ratio of the wheels and compensate accordingly. If conditions are different for each wheel -- for instance, if one wheel is on a patch of ice and the other is not -- this can be detected through the slip ratio. Although there's no magic solution to the problem of stopping a car under bad road conditions, EBD can make emergency braking under these conditions as safe as possible.

Here's another less-than-obvious benefit of EBD: When you load the trunk of your car with luggage, it changes the traction on your rear wheels, which means that more force can be applied to these wheels during braking. A standard proportioning valve wouldn't necessarily take this extra weight into account, but electronic brake distribution compensates appropriately for your car's now heavier rear end. EBD can't detect this extra weight directly, but the system becomes aware of it through its effect on the slip ratio of the tires.

To state the obvious, driving safely is important to everyone -- even pedestrians. Electronic brake distribution and antilock brake system technology, especially when coupled with other safety technologies such as traction control and electronic stability control, is a major contribution to driving safety and can help keep you and your family safe, whether on long trips or just a drive to the local grocery.

To learn more about safety and regulatory devices and other related topics, follow the links on the next page.