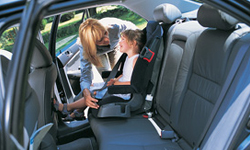 The LATCH system was rolled out gradually, with orders to be fully implemented by September of 2002. See more pictures of car safety.
Rob Van Petten/Digital Vision/Getty Images

Nearly every article about infant car seats states the same statistic: Nearly 4 out of 5 are installed incorrectly. It's true. Almost 80-percent of all infant car seats are installed incorrectly. That means that roughly, only 1 out of every 5 kids is actually safe in his or her car seat. The devices entrusted with keeping our nation's youth safe in car crashes are installed with less accuracy than the suction cups on those obnoxious "Baby on Board" signs. Research says so.

And because so many people don't use car seats at all, and most of those who do tend to use them incorrectly, car crashes are the leading cause of death in Americans ages 2 to 14. With stats like that, it was obvious that the car seat situation needed to be fixed.

The problem, researchers determined, is that there was no consistency across the industry. Car seats were a confusing mass of plastic and metal and fabric that perched awkwardly and unsteadily on a car's backseat, and it was up to the most responsible adult available to decide how to thread the car's seatbelts through the seat base's loops and come up with something that looked like it might be a tight enough fit. This was, one can imagine, done quickly, under pressure, with a squalling infant balanced on the hip, all the while grabbing fistfuls of hair. Most of the time, it was okay, since people don't crash every time they leave the driveway. But when a crash did happen, this installation simply wasn't adequate and the kid would get hurt.

And so, the LATCH system was introduced. It stands for Lower Anchors and Tethers for CHildren, and believe it or not, the acronym isn't the most awkward part of the initiative. Rather, that would be the result of the National Highway Traffic Safety Administration (NHTSA) initiative to force automakers and infant safety seat manufacturers to meet a series of standards that would simplify the entire process of getting a kid strapped safely into a car. LATCH was rolled out gradually, with orders to be fully implemented by September of 2002. Years later, there are still a lot of questions -- and some of its purported benefits are still being called into question.