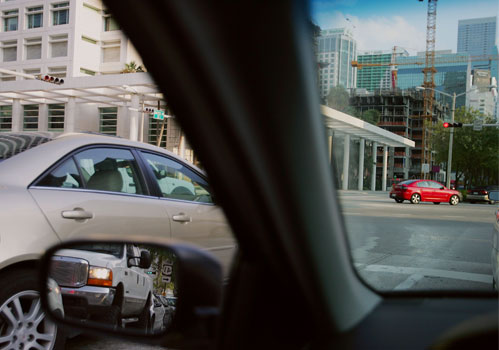 National auto discount club AutoVantage administered a survey to determine which cities have the most aggressive drivers. AutoVantage polled participants about how their fellow drivers behave on the road. The survey shows that people believe road rage is usually the result of triggers like feeling rushed, speeding, or being in traffic. Other aggressive driving behaviors include tailgating, changing lanes without using a signal, talking on cell phones while driving, running red lights, honking the horn and using angry or obscene gestures at other drivers.

Participants also provided suggestions on how to decrease road-rage incidents. Suggestions ranged from outlawing talking on a cell phone while driving to increasing police presence on the roads. Only 32 percent of the respondents felt that a major public awareness campaign would be useful -- Dr. James argues that extensive driver's education courses beginning at grade-school level are necessary to decrease road-rage incidents [source: AutoAdvantage.com].

So where in the United States are you going to find the most aggressive drivers? According to the survey, that dubious honor belongs to Miami, Fla. Miami has a very diverse, dense population, including a large community of senior citizens who have a very different driving style from younger drivers.

The other four cities rounding out the top five include New York City, Boston, Los Angeles and Washington, D.C. The city with the most courteous drivers was Portland, Ore. Pittsburgh, Seattle/Tacoma, St. Louis and Dallas/Fort Worth also ranked high in driver courtesy [source: AutoAdvantage.com].

Statistically, young men are the most prone to road rage. Whether this is due to a predisposition to aggression, a lack of experience or just the simple fact that young men tend to drive more than other age and gender groups, is still a subject of debate. In a 2002 Rage-Depression Survey, the most competitive, aggressive population polled were men under the age of 19 [source: Dr. Driving.org].

Men reported feeling a sense of rage more frequently than women. Fifty-six percent of the men surveyed said they experienced rage on a daily basis versus 44 percent of the women. More men also admitted to retaliating against others when they felt angry or provoked [source: Dr. Driving.org].

Recently, several writers have published articles about the rise in road-rage incidents among women. Most of these articles are written from an editorial perspective, with few facts or figures to support observations. However, there is the perception that women are closing the aggression gap.

It's important to keep in mind that road rage isn't some uncontrollable phenomenon. As drivers, we each have the responsibility to be as safe as we can. We also each have the choice over whether to engage in aggressive behaviors or retaliate against a real or perceived insult. So the next time you're driving and someone cuts you off or honks at you, try to keep a cool head and set a good example.

To learn more about road rage and related subjects, check out the links below