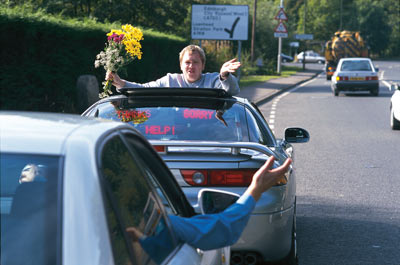 Here's the bad news: Everyone makes mistakes, even you. No matter how skilled a driver you are, you're bound to make an error at some point that could seriously agitate another driver. Here's some news that's worse: Sometimes you don't even have to make a mistake to trigger someone else's road rage. Because a person experiencing road rage isn't rational, he might interpret a reaction as innocent as an increase in speed as an act of aggression.

Fortunately there's some good news to go along with the bad -- by keeping a level head and calm point of view, you can avoid most conflicts:

Try to be kind and courteous to your fellow drivers. The best way to avoid road rage is to practice good driving habits. When you do encounter an aggressive driver, it's better to let him have his way, even when it feels unfair. It's easy to think of this as letting the bad guy win, but try to avoid that mentality. It's more important to think of driving as a group experience instead of a competition. Try to increase the distance between you and the aggressive driver. Remember that he is likely under just as much stress as you are -- he's just really bad at handling it.

In the next section, we'll look at ways to defuse your own road rage.

In an effort to bridge the communication gap among drivers, Jerry E. Beasley and E. Scott Geller patented a Vehicle Signaling System, which allows drivers to display a message, like "sorry," to other drivers. According to the patent, "the messages associated with the use of the communication system are selected for enhancement of safety and to avert the negative responses associated with road rage" [source: U.S. Patent and Trademarking Office].