Where does the money go? 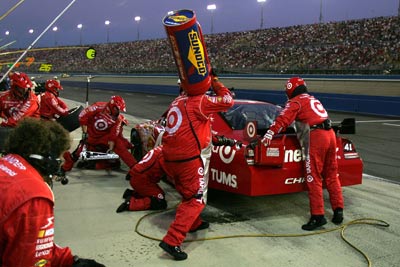 Racing fuel is free on race day, but NASCAR teams pay a premium for it during practice and testing on the remaining six days of the week.
Todd Warshaw/Getty Images for NASCAR

One of the biggest expenses any NASCAR team has these days is fuel -- and not just for the race. Every team has to get at least one car and one full pit crew to the race -- plus the driver, the owners, the management, and all the team's racing gear and tools. This requires a couple of large transport trucks that drink diesel fuel for breakfast, lunch, and dinner. Just as an example, if diesel fuel is priced at $4 a gallon, the cost to fill a 300-gallon (1,135-liter) tank is $1,200. That's an expensive stop at the filling station.

Sunoco, another NASCAR sponsor, supplies free gasoline for the race cars on race day; however, those cars get run a lot more often than just one day a week. Teams test their equipment for speed and safety several times during a typical week, sometimes at non-sanctioned tracks, which means they pay for their own race fuel at around $6.25 per gallon (around $1.65 per liter). An all-day test session can burn through a 55-gallon (208-liter) drum, which costs nearly $350.

The driver typically flies from track to track, which is rather expensive, or the driver may take a tour bus, which is almost as expensive as flying. Now, we know what you're thinking, but don't worry about the driver -- he isn't paying for all of this travel out of his own pocket. Like everything else in NASCAR, the driver's income is negotiable. His salary is generally paid for by the sponsor, which gets a certain number of scheduled appearances out of the driver in return. The driver will also split race-day winnings with the team, and there are usually incentives for winning big races -- like the Daytona 500, for example. The driver can also bring in fees for additional appearances or even license his likeness to advertisers. The best drivers -- with the best agents -- can bring in millions each year, like 2008's top earner, Jeff Gordon. In 2008, Gordon garnered $17 million in endorsements and royalties, and $15 million in salary and race winnings, for a total of $32 million.­

Since everything is negotiable, let's talk about all those little logos that cover every surface of a NASCAR race car.

Driving without a Net

In the early days of stock-car racing, very few teams had sponsors. If they did, it would be an "in-kind" deal, where a company would provide tools or equipment in exchange for a sticker or mention of the company's name by the driver. But ever since sponsorship took hold in the 1970s, it's next to impossible to run races without corporate backing. Just ask Morgan-McClure Motorsports, which had to disband its Sprint Cup team for the 2008 season when it lost its sponsor, State Water Heaters.