Why doesn't NASCAR race in the rain? 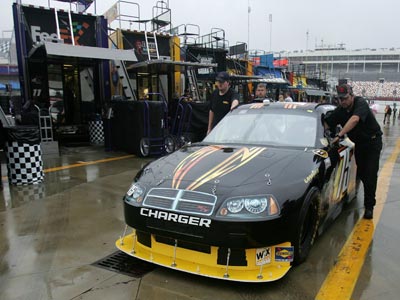 After rain canceled practice and qualifying for the NASCAR Sprint Cup Series Bank of America 400 in North Carolina, there was little left to do but to push the cars out of the garage area.
Todd Warshaw/Getty Images Sport

­Most people dislike driving in the rain, and with good reason. It's hard to see when the rain is coming down on your windshield. The wet conditions affect your stopping and turning ability. In other words, it's just not very pleasant. Consider how much worse it would be if you didn't have any windshield wipers at all, your tires had­ no tread on them, and you're going down the highway at about 200 miles (321.87 kilometers) per hour. It shouldn't be too hard to guess why NASCAR drivers aren't too keen on racing in the rain, either.

While it's true that other motor sports race in rainy and wet conditions, there are a few aspects of NASCAR racing that make it especially difficult to race in the rain. In this article, we'll take a look at why NASCAR doesn't race in the rain by reviewing the safety aspects of how the tires handle in the rain, what happens to the tracks in wet conditions and how a canceled race affects everyone involved.

­Days of planning go into just one race. The track is tested and the cars are prepped for the expected race-day temperature and conditions. The drivers and crew determine how the car should handle and make adjustments to accommodate that specific track. When the rain clouds come, all of that planning goes out the window. Aside from the danger involved, bad weather conditions hurt the overall competitiveness of the sport.

­To fully understand why NASCAR doesn't race in the rain, we need to learn how the tires and the tracks respond to rain. Let's first take a look at the tires and see why the typical NASCAR tire is less than ideal for rainy conditions.

Normal tires that people use on the roads have grooves in them, known as the tread. These grooves allow the tire to channel water away from the tire as they ride down the road. As your tire gets older, the rubber compound wears down and the treads become lower. In wet conditions, your ability to stop decreases the lower your tread becomes. If the tread is too low, your car can hydroplane on the wet road. This happens when the tire isn't making enough contact with the road and is instead skimming across the water on the road.

­NASCAR tires have a completely smooth tread. These tires are designed to have as much contact on the track as possible. During a normal race, the cars are driving at speeds around 200 mph, and handling the forces of cornering and the angle of the track. At these speeds and conditions, NASCAR drivers need the greatest amount of surface area on the tire in order for the car to stay on the track and handle properly.

­NASCAR tires endure something called the slip angle during a race. When a NASCAR race car comes around the corner of a track, the tires will point in one direction, while the wheel goes in a slightly different direction [source: Leslie-Pelecky]. This causes the tires on the car to skid along the track slightly, allowing the driver to maximize his or her turning force. If a driver goes above the normal slip angle, about two to four degrees, he or she risks allowing the tires to skid too much on the track, which can lead to serious loss of control. Wet track conditions increase this risk.

­Having said all that, NASCAR does have rain tires, but they're rarely used. Most track and weather conditions aren't conducive to using the tires and maintaining a safe and competitive race simultaneously. Let's go on to the next page and take a look at how rain directly affects track conditions.

In August 2008, during the NAPA Auto Parts 200 race in Montreal, Quebec, NASCAR broke out their rain tires for the first time in a points race. The race began with normal tires, but was later stopped so crews could bolt on rain tires and windshield wipers. Like most races in rain conditions, the race was called after the halfway point, but not before drivers got the chance to test out Goodyear's eight-year-old rain tire. Fighting near-misses, rain puddles and a few wrecks, Ron Fellows walked away with the historic win. 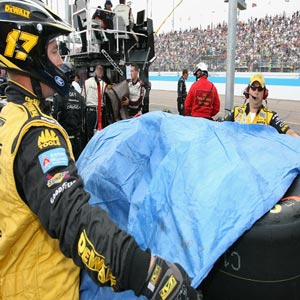 ­Each NASCAR track poses its own benefits and drawbacks. All of those drawbacks intensify in wet weather. When rain starts falling from the sky, even a light drizzle, the caution flag goes up, but the red flag usually follows, signaling drivers to pull into the pits. Why not keep racing? All the fans are there, the crew is geared up, and the driver's already been racing and may even be ahead. Some people debate whether race organizers should let the race continue, but it all comes down to safety.

Each NASCAR track is built differently, but for the most part they all respond to rain the same way. If there is just a little moisture on the track, it's possible that NASCAR will bring out jet blowers to dry off the track and try to get the race started again. However, when there is a substantial amount of rain, it's much more difficult to get a track ready again. When it rains on a NASCAR track, the water starts seeping into the track. If it continues to rain, the water eventually builds up under the top layer of asphalt and looks for a way out. As the water increases, it starts flowing out of seams in the track. These streams of water are called weepers.

­These weepers pose a major risk to drivers as the car runs through them. To combat these unwanted streams, NASCAR will occasionally use saws to cut grooves into the track to allow the water to flow out of the track more quickly. This reduces the amount of water seepage and can help drain the track.

Even if these grooves are cut into the track, the lack of proper drainage onto the infield poses another risk. Drivers occasionally skid out and end up in the infield, where they can recover and get back into the race. In dry conditions, a driver may be able to maneuver his or her car out of the spin easily and get back into the race, but if that grass is wet, the driver's more likely to get stuck and have a difficult time getting back into place.

So, not only is it safer for drivers not to race in the rain, it also keeps them from losing position if their car is affected by the conditions. On the next page, we'll learn what goes into the decision to cancel a race, what happens to ticket holders when that happens, and how this affects NASCAR's bottom line. 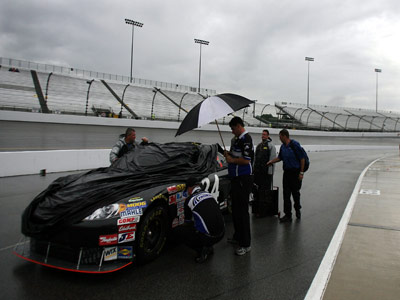 These crew members are waiting for Tropical Storm Hannah to arrive. Do you think they're preparing for the next raceable day?
Marc Serota/­Getty Images Sport

­As we mentioned earlier, it doesn't take a lot of rain to delay a race. Once the rain starts coming down and the track gets wet, the red flag goes up and everyone waits for a window of sunshine, or at least for the rain to stop. If that doesn't happen, then the race will need to be rescheduled.

NASCAR makes the final decisions when it comes to rained-out races, and the organization typically has two options in a rain scenario. The NASCAR rules allow for a winner to be called after the halfway point of the race has been reached in bad weather conditions. At least half of the laps must be completed in order to call a winner. So, if 101 laps have been raced at the Daytona 500 (it's a 200-lap race) and it starts pouring down rain with no sign of letting up, NASCAR could officially decide that the race has been completed and a winner would be declared.

If the race hasn't reached its halfway point, and a delay of the race won't change the conditions of the track, then the race can be rescheduled for another day, usually the next dry day, sometimes referred to as the next raceable day [source: Huller]. In some cases, races have been postponed to the next available race weekend, which poses a problem considering the lack of open weekends in a NASCAR season. This, of course, isn't a desired outcome for anyone. The drivers and crew teams spend a lot of time prepping for their next race and a rescheduled one only limits practice time.

­­In addition to the drivers and the crewmembers, there are also drawbacks for NASCAR track owners, vendors and fans. On a normal race weekend, many workers are hired specifically for that weekend to man the concessions, work security or direct traffic. If a race is rescheduled for the next raceable day, which may not fall on a weekend, some of the workers could be back at their full-time jobs and therefore unable to work at the race. This poses a logistical problem for track owners when a race is rescheduled  -- it costs them more money to hire people for another day of work. Vendors also lose money because people are less willing to stand in the rain to buy merchandise.

Rain can also affect NASCAR's advertising. Advertisers spend hundreds of thousands of dollars on race weekend. Those companies are paying for a specific day, time and projected viewing or listening audience. When a race changes because of poor weather conditions, advertising contract conditions for the rescheduled race may change as well. When races get rained out, ticket holders are able to redeem their ticket stubs for the rescheduled race but still have to pay for additional meals, another night's stay in a hotel and maybe even a day of lost wages.

­Anyone involved in a NASCAR race never wants to see it get rained out, but these delays and cancelations are necessary for the safety and competitiveness of the sport. To find out more about NASCAR racing, see the links on the next page.