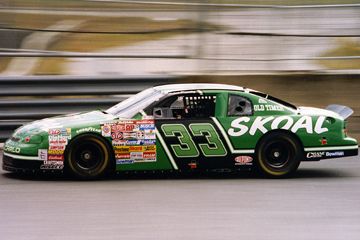 Robert Pressley drove the Skoal Bandit car on the NASCAR Cup circuit for owner Leo Jackson during the 1995 and 1996 Cup seasons.
(Photo by ISC Images & Archives via Getty Images)

In 1910, Lee Oldfield was driving a green car in a race at the New York State Fair in Syracuse. His car went off the track and killed several bystanders. Ten years later, in 1920, Gaston Chevrolet (brother of Louis Chevrolet, the car company founder) was killed in a crash during an automobile race in Beverly Hills, California. As the story goes, the car he was driving happened to be green. Thus, according to legend and superstition, this pair of events means that green race cars are indeed unlucky. However, some racers and racing fans believe the superstition goes back even before the 1910 and 1920 incidents (even though no one seems willing to offer up a plausible alternative theory).

Pro drivers traditionally indulge in some of the goofiest superstitions in the sports world, although the latest generation might be a bit more pragmatic. The green car superstition appears to have hit its peak between the 1920s and the 1950s, and a lot of pros today claim not to be bothered by it at all. Still, race car drivers are a nervous bunch. So, what gets drivers behind the wheel of a green car these days? The answer is simple: money. That's because NASCAR, and every other pro racing series, simply would not exist without corporate sponsorships. Corporate sponsors pay the bills. They keep the proverbial lights on. They provide cars and equipment for the teams, crucial to a driving career, especially in a series like NASCAR, because in that series it costs more money for each car to compete in the race than the winning driver actually earns. In return, these companies get a lot of publicity. If a sponsor happens to have a green logo, then it's a safe bet that the company's sponsored driver is going to be behind the wheel of a green car. The driver simply has to deal with it. (It's worth noting that Formula One did not allow corporate sponsorship until 1968, so drivers in that particular series weren't necessarily worried about car color until then, and they haven't really bought into the superstition.)

Some examples of successful, or at least catastrophe-free, green cars: Darrell Waltrip driving for Mountain Dew and Gatorade; Bobby Labonte, and later, Kyle Busch, for Interstate Batteries; Harry Gant and Skoal Bandit; Carl Edwards in a car sponsored by Scott's, and later, Aflac; Kenny Wallace in a car sponsored by the United States Border Patrol; Dale Earnhardt Jr. driving for Amp Energy, and Danica Patrick, who is very forthcoming about her refusal to believe in superstitions, has driven a green car for GoDaddy as well as a car adorned with green four-leaf clovers. Perhaps it's only in auto racing that an otherwise lucky symbol would contradict itself, but the negative perception of a green car doesn't seem to have affected any of those pros. Even Jeff Gordon, who's suffered an injury and some disappointing results while driving a green car for sponsor Nicorette, chalks up his "bad luck" to the highs and lows of driving fast cars for a living.