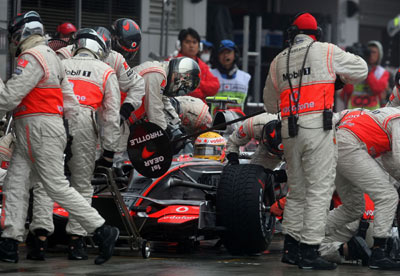 A Formula One pit crew has only seven to 10 seconds to complete a pit stop.
Clive Mason/Getty Images

The tires of a racing car have a finite amount of grip to offer, and nothing tests this more than cornering. If a car's speed is too great for a corner, it may spin out of control. If a car slows down too much, it may lose precious seconds. Achieving the fastest time through the corner requires just the right combination of braking, turning and power so that the tires are pushed exactly to their limits.

How a team manages its pit stops during a race is almost as important as the driver's skill out on the track. In a matter of just seven to 10 seconds, the pit crew has to complete the following:

It's not just the duration of a pit stop that's important, either. Timing of stops is equally important. Before the race, the team usually has its pit stop strategy worked out based on the characteristics of the track, the car's grid position and the positions of the other cars in the field. Of course, the strategy can be changed during the race in response to changing weather conditions or other events.

­­Next to the start, the finish of a grand prix is the most important part of the race. The first driver to cross the finish line receives the checkered flag. After the checkered flag, the winner must complete another lap, known as the slowing down lap. Only then is he allowed to return to the pits to celebrate with his team members. This, however, is not the end of the race. After entering the pits, the driver must direct his car to an area called parc fermé, which in French means "closed park." Parc fermé is a fenced-off area where only race officials and drivers are allowed, and it is in this area that the winner's car is inspected to make sure it meets all of the technical regulations. The driver must also be weighed to make sure the car and driver do not exceed the specified weight limit. Finally, if the car and driver pass these inspections, they are declared winners. The driver is then escorted to the winner's podium and given champagne to pop as part of the celebration.