Formula One Transmissions and Aerodynamics 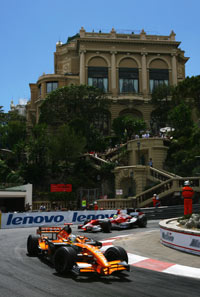 It's the job of the transmission to transfer all of the engine's power to the rear wheels of the Formula One car. The transmission bolts directl­y to the back of the en­gine and includes all of the parts you would expect to find in a road car -- gearbox, differential and driveshaft. The gearbox must have a minimum of four forward gears and a maximum of seven gears. Six-speed gearboxes were popular for several years, but most Formula One cars now run seven-speed units. A reverse gear must also be fitted. The gearbox is connected to a differential, a set of gears allowing the rear wheels to revolve at different speeds during cornering. And the differential is connected to the driveshaft, which transfers power to the wheels.­

­Shifting gears in a Formula One car is not the same as shifting gears in a road car with a manual transmission. Instead of using a traditional "H" gate selector, drivers select gears using paddles located just behind the steering wheel. Downshifting is done on one side of the steering wheel, upshifting on the other. Although fully automatic transmission systems, including systems with sophisticated launch control, are possible on Formula One cars, they are now illegal. This helps reduce the overall cost of the power train and enables drivers to use gear-shifting skills to gain advantage in a race.

A Formula One race car is defined as much by its aerodynamics as it is by its powerful engine. That's because any vehicle traveling at high speed must be able to do two things well: reduce air resistance and increase downforce. Formula One cars are low and wide to decrease air resistance. Wings, a diffuser, end plates and barge boards increase downforce. Let's look at each of these in greater detail.

­­The result of all this aerodynamics engineering is a combined downforce of about 2,500 kilograms (5,512 pounds). That's more than four times the weight of the car itself.

Next, we'll learn about Formula One suspensions, brakes, steering and tires.­ ­