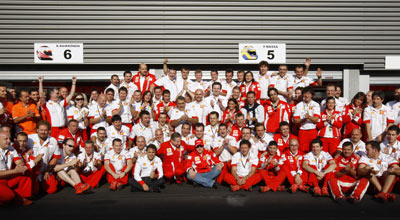 During a grand prix, it's easy to think that Formula One racing begins and ends with the driver. After all, the purpose of having such strict regulations about the car is to eliminate all variables except for the skill and expertise of the driver. But a Formula One driver is just one member of a huge team that employs hundreds of people. Let's break down a typical Formula One team to understand who does what.

The nature of the boss depends on the nature of the team. Some teams are owned by the car manufacturers, who turn over management of the team to one of their top employees. For example, the team boss of Ferrari is Jean Todt, the CEO of the company. Todt himself answers to Luca di Montezemolo, chairman for Fiat, Ferrari's parent company.

Other teams are privately owned, and the owners usually founded the team and risked their own finances to get a car ready to compete. With so much at stake, team owners are almost always the team boss. Two well-known owner-bosses are Ron Dennis of McLaren and Frank Williams of Williams F1. A famous owner-boss of the past was Enzo Ferrari, who founded his team in the 1940s and stayed on as boss even after Fiat bought Ferrari in 1968.

A Formula One team must effectively manage the commercial and technical aspects of the business. The commercial director attracts sponsors and seals the deals. One of his main jobs is to determine levels of sponsorship and placement of logos on the car. Main sponsors can pay handsomely -- on the order of $50 million -- for the privilege of having their brands displayed on a Formula One car.

The chief aerodynamicist oversees a whole squad of aerodynamicists who dedicate themselves to making sure the car design reduces air resistance, yet creates the right amount of downforce.

The chief designer determines the basic layout of the car, as well as the materials that will be used to build it. Each team typically employs two chief designers -- one for the current season and one for the next season.

The chief of R&D heads up automotive-innovation projects, exploring new materials and technologies that can keep his team ahead of the competition.

Each Formula One team has two drivers. You might think this creates an atmosphere of support and camaraderie, but that's not necessarily the case. A Formula One driver is out to beat his rivals, including the other driver on his team. In some cases, a team may ask a driver to let his teammate overtake him or even win the race. This practice is technically against the regulations, but it's difficult to enforce.

­­So, other than the ability to put up with the politics of a racing team, what makes a Formula One driver unique? Most drivers share many qualities, including strength, endurance, mental alertness, quick reflexes and a desire to be the best race car driver in the world.

On the next page we'll learn about the Formula One season and how the teams prepare for the grands prix.

One of the most important people of Formula One does not belong to a team. He is the president of the Federation Internationale de l'Automobile (FIA), motor racing's governing body, which oversees every aspect of F1 racing. The current president is Max Mosley.