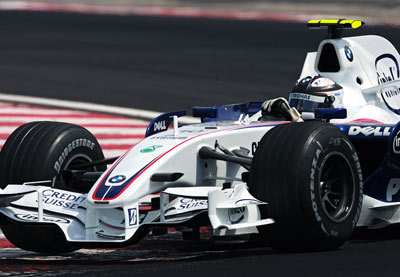 Safety has not always been a paramount concern in Formula One racing, and there have been many tragedies -- both for drivers and spectators. In the last few decades, however, much has been done to protect racers and their fans from serious injury. Let's look at some of the key safety measures used in Formula One.

The monocoque (cockpit) incorporates the driver's survival cell -- a superstrong part of the car designed to stay intact and form a protective cocoon around the driver in the event of an accident. The survival cell includes the seat, which is designed to fit a driver's exact dimensions. The seat must be positioned low enough that the driver's head does not stick out too far and get crushed if the car rolls over.

The driver's overalls, when combined with boots, gloves and helmet, form a complete and seamless barrier. Made from a synthetic fiber known as Nomex, Formula One overalls are designed to protect drivers from a fire for at least 12 seconds, the time it should take medical and rescue personnel to reach an accident. The sponsor logos that appear on the overalls must also be made from this fire-resistant material.

The Head and Neck Support System (HANS) is a carbon-fiber collar that fits around a driver's neck and restrains his head and neck in the event of a crash or collision. The HANS connects loosely to the helmet via three straps, allowing free movement of the head yet helping to control helmet deflection during frontal impact. Robert Hubbard, an engineering professor at Michigan State University, developed the HANS in the 1980s as a protective device for powerboat racers, and it was soon adopted in most motor sports. After some design modifications to accommodate the unique needs of Formula One, the HANS became mandatory equipment for all drivers in 2003.

The basic size and shape of Formula One helmets hasn't changed much in the last two decades. What has changed is the choice of materials used to make them. Today's helmets consist of the same layered carbon-fiber material used to construct the monocoque. This results in an ultrastrong, but extremely lightweight, helmet that decreases the momentum a driver's head would experience in a serious crash. All helmets are made to fit a driver's exact dimensions.

A five-point harness secures a driver to his seat. The five "points" refer to the five straps that make up the harness: one over each of the driver's shoulders, one on each side and one that comes up between the legs. All of the straps connect to a central buckle, which is locked for the race. There is a quick-release mechanism so a driver can get out of the car quickly in an emergency.

Formula One employs hundreds of people at each race to help ensure the safety of drivers and spectators. These marshals wear bright orange coveralls and have three primary jobs: Warn drivers of danger, clear debris or damaged cars from the track and keep spectators in their assigned areas. Formula One also keeps two special cars -- the safety car and the medical car -- on hand at each race. The safety car slows up the race in the event of a crash or other incident. When the safety car is on the track, the field must slow down behind it, with the leader in front. No driver can try to overtake another in such a situation. The medical car is used to rush doctors and rescue personnel to a driver who is injured during a race.

Formula One is one of the most popular sports in the world. Each grand prix draws more than 120,000 spectators to the track. Another 30 million people in 150 countries watch the race on television. In comparison, average paid attendance at a regular-season NFL game is about 66,500. A Formula One race, however, is not regular in any way. If anything, it's like the Super Bowl.

And, like the Super Bowl, a grand prix can be an expensive endeavor for a fan. For starters, general admission tickets cost about $150. But for most Formula One fans, the rewards far outweigh the costs. And those rewards are pure and simple: witnessing firsthand all of the agony and ecstasy that results when the world's fastest race cars compete for victory.

Check out the next page for more information on Formula One racing.­