Formula One Suspension and Other Systems 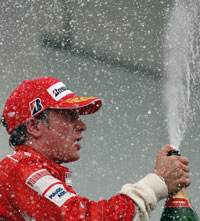 You would recognize all of the parts of the disc brakes found on Formula One cars. The big difference, of course, is that the brakes used in Formula One must stop a vehicle traveling at speeds greater than 200 mph. This causes the brakes to glow red-hot when they are used. To help reduce wear and tear and increase braking performance, carbon fiber discs and pads are now used. These brake systems are extremely effective at temperatures up to 750° C (1,382° F), even though they are lightweight. Holes around the edge of the brake disc allow heat to escape rapidly. The cars also have air intakes fitted to the outside of the wheel hub to cool down the brakes. The air intakes are changed for the different braking requirements of each track [source: F1 Country].

The tires of a Formula One race car may be the most important part on the entire vehicle. This seems like an overstatement until you realize that the tires are the only things touching the track surface. That means all of the other major systems -- engine, suspension and braking -- do their work by way of the tires. If the tires don't perform well, the car won't perform well, regardless of the technical superiority demonstrated in other systems.

Like every part of a Formula One car, tires are highly regulated. Slick tires -- those with no tread pattern and a high contact area -- were introduced in the 1960s and used until 1998. Then the FIA change the rules to reduce cornering speeds and make the sport more competitive. On today's Formula One cars, the front tires must be between 12 and 15 inches wide and the rear tires between 14 and 15 inches wide. Four continuous, longitudinal grooves must run around the circumference. The grooves must be at least 2.5 millimeters (0.098 inches) deep and 50 mm (1.97 inches) apart. In rainy conditions, cars can have "intermediate" and "wet" tires, which have full tread patterns designed to channel water away from the road surface.

Formula One tires are made from very soft rubber compounds which, as they heat up, adhere to the road and provide enormous gripping power. In fact, racing tires perform best at high temperatures, so they have to be warmed up before they are race-ready. The tradeoff is decreased durability. A Formula One tire is designed to last for, at most, about 125 miles.

Traction control can extend the life of tires by limiting wheel spin, especially under loads imposed by cornering. Traction control systems use electronic sensors to compare the speed of the wheel to the speed of the road the wheel is driving over. If the wheel is traveling faster than the road surface -- an indication that the wheels are dangerously close to spinning -- then the engine is automatically throttled back. Traction control has been allowed and banned at various times throughout modern Formula One history. It has been allowed since the beginning of the 2002 season, but it will be outlawed altogether at the start of the 2008 season.

The steering wheel of a Formula One car bears little resemblance to the steering wheel of a road car. As the car's command center, it houses a dizzying array of buttons, toggles and switches. During the race, the driver can control almost every aspect of the car's performance -- gear changes, fuel mixture, brake balance and more -- with just the touch of a finger. And, amazingly, all of this control comes on a steering wheel that is about half the diameter of a normal car's steering wheel.

Formula One racing is a team effort -- more than 100 people on each team work to make the season success. We'll learn about them on the next page.