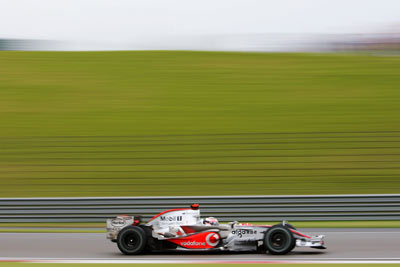 ­S­unday is race day in the world of Formula On­e, and it kicks off with each team plotting its strategy, trying to gain some advantage while adhering to regulations. Shortly after the rules reintroduced fueling stops, teams realized that they could carry less fuel and run faster, knowing that they could refuel during pit stops. A 2007 rule stating that all teams must use tires from a single supplier is another change that has had an enormous impact on race strategy.

Most of this planning and tuning comes down to the most critical part of a Formula One race -- the start. On many circuits, where overtaking is nearly impossible, the race start all but determines the winner of the race. The start procedure looks something like this:

­The sprint to the first corner is all-important as drivers jockey for position. Depending on the quality of his start, a driver will take either an offensive or a defensive strategy. A driver on the offensive is trying to gain position, and a defensive driver is trying to protect his position. The sporting regulations specify what a defending driver is allowed to do to prevent another driver from overtaking him. If a driver is defending his position, he can't weave back and forth. He is allowed a single blocking move and no more.

­As you might expect, close racing, with four or five cars abreast, is common at the beginning of the race. But after the first corner, the field begins to separate and the focus shifts from general chaos to isolated battles between drivers. Overtaking after the race start is quite difficult, although it can happen.

On the next page we'll look at three factors that affect a Formula One race after the critical start.

How important is the pole position? Michael Schumacher, one of the sport's greatest drivers, earned 64 pole positions during his career. He also has the most drivers' titles (seven), the most total points (1,248), the most grands prix wins (84) a­nd the most wins in one season (13).