What were the art deco cars? 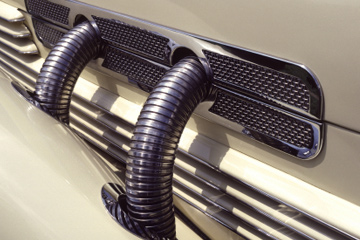 Many of the Art Deco era cars were like land-going yachts for the very rich, so they featured massive engines, swooping fenders, big round headlights and lots of chrome.
©iStockphoto.com/Anna Lisa Yoder

Art Deco became popular in the 1920s and 1930s because of its simple yet grand expressions of style. The automobiles of that era were no different -- they were exciting and sexy, not meant to be just ordinary transportation.

Vehicles today classified as Art Deco cars were often two-door coupes and roadsters with long hoods and small, rounded-off trunks. They featured long, swooping fenders over the wheels, round headlights and lots of chrome. Another important design characteristic was streamlining -- cars with smooth, sleek curves that appeared to be speeding, even when standing still.

They hail from the era of coach building -- a process where one company, like Bugatti, would make a naked chassis and engine and another company would custom-design and build the surrounding body and interior to the owner's exact specifications.

Some great examples of Art Deco cars were the high-end ones made in France, the home of the artistic movement. Many of these cars were like land-going yachts for the very rich, so they featured massive engines. They include the Hispano-Suiza J12 Cabriolet, which had a 9.0-liter 12-cylinder aircraft-based engine, the Delahaye 165 convertible -- which also packed a V-12 and the Delage D8-120 Cabriolet, which cost $200,000 at a time when an average American home cost about $3,800 [source: Garrett].

But Art Deco cars weren't limited to just hyper-luxury. Eventually, the movement began inspiring the bodywork on more affordable cars. The Chrysler Airflow was designed with this style in mind; it featured a flowing shape with rounded fenders and a curved "waterfall" grille. While sales of the car weren't very successful -- the exotic styling may have been a little to ostentatious for average buyers -- the car today is considered a design classic.

Up next, we'll look at modern Art Deco cars and see where many of the classics ended up.