How the Gibbs Aquada Works

Browse the article How the Gibbs Aquada Works 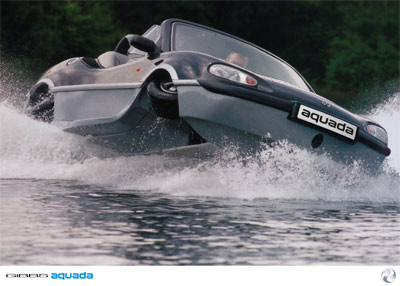 ­Part of the car-buying process involves selecting the options you want to upgrade or customize your vehicle. In a few years, automotive retailers might offer us an option that will transform landlocked sports utility vehicles and sedans into amphibians that can traverse land and water with equal ease.

­Gibbs Technologies has developed High Speed Amphibian (HSA) technology that could transform cars into amphibians. To showcase this new technology, Gibbs built the Aquada, an amphibian vehicle that debuted in late 2003. While the British company eventually hopes to license the HSA technology to large automotive manufacturers, they are currently focused on selling the Aquada at a cost of £150,000 ($295,110).

In this article, we will take a look at the Aquada and the technologies that could meld our waterways and roadways into a single, unified transportation channel. 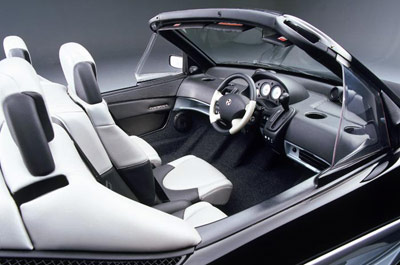 ­Stepping over the side of the vehicle and into the cockpit, you realize that the Aquada is a vehicle that doesn't fit neatly into any existing category. You step directly into it like a boat, but the driver sits behind a car-like steering wheel. The three-seat Aquada was designed to allow for a driver, a water skier, and an observer.

"It is uncanny because all the cues inside the vehicle say you are driving a car, but outside it's a boat," said Dr. Keith Alexander, a senior lecturer in mechanical engineering at Canterbury University, who acted as a consultant on the Aquada. "You are sitting there at the steering wheel, with your foot on the pedal but instead of the roadside going past, it's water."

In developing the Aquada, Gibbs designers and engineers used the Seadoo watercraft as their comparator for water performance, according to Neil Jenkins, Managing Director of Gibbs Technologies. It is intended as a leisure vehicle with agility on the water. On the road, it is expected to handle and perform like an average sports car, but Jenkins doesn't identify a specific comparator.

"It corners and handles well, and it's predictable. It's a good average sports car," says Jenkins.

Jenkins says performance has not been compromised for either mode of travel, and that consumers will get equal performance on land and water. To understand just how well it compares with its road and water counterparts, we need to look at the components of the Aquada. 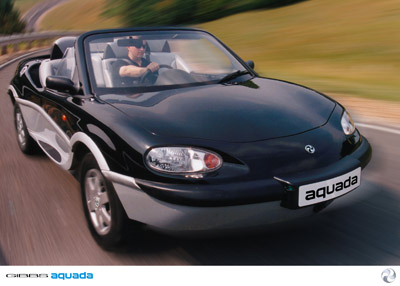 This engine also provides power to the amphibian's jet, which propels the vehicle through water.

The jet is a proprietary unit created by Gibbs. As Gibbs developed the Aquada, it was necessary to design a jet that was lightweight and compact. The jet also needed to expel 1 ton of thrust, which is the force required for the vehicle to plane in the water. The jet is 35 inches (.89 meters) long and weighs 88 pounds (40 kilograms).

Jenkins says that most jets that produce the same amount of force are twice as long and would not fit the Aquada. The jet's thrust and the low power-to-weight ratio of the engine allow the amphibian to travel up to a maximum of 34.7 mph (55.8 kph) and accelerate to a plane in five seconds.

Here is a breakdown of some other features of the Aquada:

The Aquada also uses patented technologies to allow it to transition from water to land and back. We'll take a look at this transformation process in the next section. 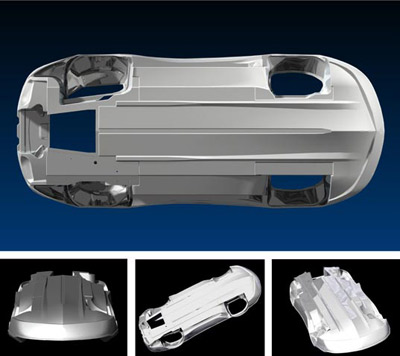 The design of the Aquada's hull
Photo courtesy Gibbs Aquada

­­About 75 percent of th­e Earth's surface is covered by water. A vehicle that could travel on land and water could potentially change current transportation models. For an amphibian to work, it must be able to float, prevent leakage and corrosion, and successfully transition from land to sea and back.

The Aquada has no doors, which helps prevent leaks. The basic structure is an aluminum-bonded space frame. To address the issue of corrosion, Gibbs has tested its materials under extreme conditions. Every component has undergone a 2,000-hour salt-spray test, which is about four times longer than a standard automobile is tested. Jenkins said that the company has gone to extra lengths to ensure safety.

"There's residual buoyancy, so you can't sink the vehicle," says Jenkins. "If you chain it to the bottom of the English Channel for a week and then let it go, it would pop to the surface." 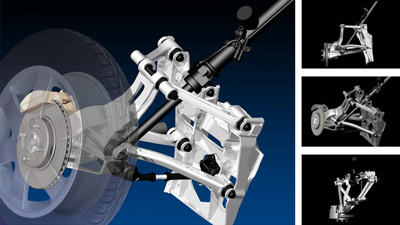 ­Other attempts at amphibian vehicles have been less successful because of drag, which is mainly due to an i­nability to retract the wheels. Gibbs has patented several technologies that allow it to retract its wheels like an airplane retracting its landing gear.

As the vehicle enters the water, the driver simply presses a button to trigger the vehicle's four-second transformation. Here are the actions involved in the conversion:

­During the transformation, the driver should rev the engine to about 2,000 revolutions per minute (rpm) to provide sufficient thrust to the jet. At this point, the jet is already submerged and begins expelling water to push the Aquada.

The Aquada is an engineering achievement that was made possible by the work of several dozen engineers and designers over the course of seven years. In the next section, we'll discuss the future of the Aquada.

Bringing the Aquada to Market 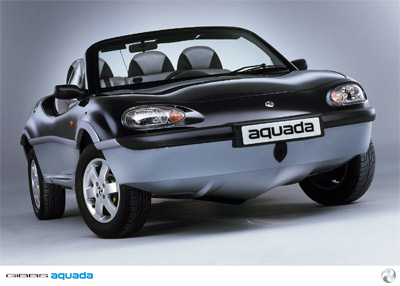 ­The Aquada is an expensive leisure vehicle at £150,000 (about $295,110). Its curren­t price makes it more expensive then all but a few cars in the world. Jenkins concedes that the Aquada is an exclusive vehicle that will appeal to a niche market for the next year or two.

For approximately the price of an Aquada, you could also buy one of the following luxury sports cars:

"We're not out to compete with Porsche or Ferrari, because you can have more fun with the Aquada on a bit of water than you can in a 40-acre car park with a Ferrari," says Jenkins.

Gibbs' long-term plan is focused on licensing the patented HSA technology to automotive manufacturers, who would integrate it into their vehicle designs.

"Our aim is in five, six, 10 years time, you'll be able to go out and purchase your normal vehicle from a normal showroom, and one of the options that you might have on the options list is High-Speed Amphibian technology," says Jenkins.

In the meantime, Gibbs is selling the Aquada. Gibbs is now in the process of getting the amphibian on the road. It is already legal for road and water use in Europe, where the European Recreational Craft Directive classifies it as a passenger-car vehicle and a Category D watercraft.

Drivers need a road license and a water license, and England requires a Ministry of Transport (MOT) certificate every year from the vehicle's third birthday. The Aquada is not yet legal in the United States, where it still faces Environmental Protection Agency (EPA) concerns. 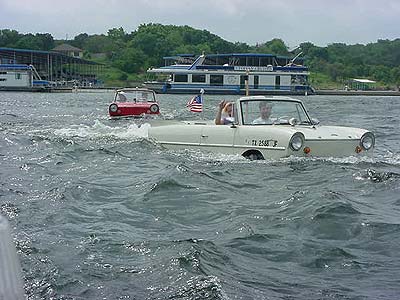 ­The history of the amphibian parallels that of the automobile. Even as the automobile was in its infancy in the early twentieth century, people were already working on creating an amphibian. This a list of some of the more notable efforts to build one.*

For more information on the Aquada and related topics, check out the links on the next page.