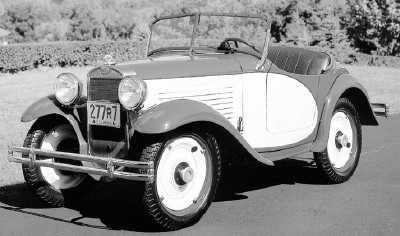 The 1930 Austin American Roadster was more of a novelty than transportation.

When Sir Herbert Austin came to America in 1929, the well-known English manufacturer had many people excited over his plan to build cars in the USA. After a tour of the country, he announced that ­the American Austin would be built in Butler, Pennsylvania.

Detroit shook its collective head, but Butler wasn't such a strange choice. It had access to industrial services and an eager work force, and it was close enough to East Coast ports to make importing components from England quite feasible. The basic concept of the car itself seemed promising, too, and as production started in May 1930, the company claimed it had close to 200,000 orders for its new ultralight, ultraeconomical car.

The American Austin was built through 1934, and the same engine was used throughout the production run. It was an L-head four that displaced 46 cubic inches, had only two main bearings, and developed 13-14 brake horsepower at 3200 rpm. A roadster and coupe were initially offered. In 1931, a business coupe, Deluxe coupe, and 2/4 passenger cabriolet were added. Once production fired up, some of the original prices were cut, and the figures were reduced again in 1933 in an effort to boost sales.

For a while, prospects for the American Austin looked good -- but only for a while. The 1930 output of 8558 units would never be exceeded. Two factors were largely responsible for the lackluster reception. One was the general business decline brought on by the Depression.

The other was the fact that, even in bad times, Americans didn't take to midget cars. To be sure, the American Austin was a midget. Its 75-inch wheelbase was fully 16 inches less than that of the future VW Beetle. Also, the Austin weighed only 1100-1200 pounds, and Americans were notoriously leery about light cars in those years, as many still are. It was an attractive little car, designed in part by Alexis de Sakhnoffsky, but that didn't seem to matter, and production ground to a halt in 1935.

Austins provided a welcome touch of amusement in a drab period for America. And, for a few people, they became a sort of reverse status symbol, much like the Beetle would be in the 1950s. Al Jolson, who loved cars and usually drove Packards or Lincolns, bought the first Austin coupe delivered to a private buyer.

He was followed by numerous other Hollywood stars: Buster Keaton, Slim Summerville, and the "Our Gang" kiddies. Austins even starred in a movie. They were used as "steeds" for a knightly battle in Will Rogers' A Connecticut Yankee in King Arthur's Court. It made for a great movie scene, but it didn't help to sell Austins.