The Life and Death of an Alternator 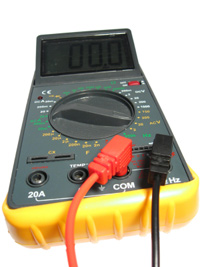 A voltmeter like this could help to figure out if your alternator is on the fritz.
iStockphoto/Piotz Zawisza

As we saw in the beginning of the article, a failing alternator will kill a battery and ruin your day. But why did the alternator fail in the first place? Alternators have moving parts, get dirty and are subject to stress from heat and cold. As a result, the internal parts gradually wear out.

One of the most common failures is bearing failure. The needle bearings that allow the rotor to spin freely inside the stator can break down from dirt and heat. When the bearings fail, the rotor will not spin efficiently and can eventually seize. Usually an alternator with bearings failure makes a loud grinding noise. If you suspect this problem, it's only a matter of time before the alternator gives up. Older vehicles with generators tend to require much more maintenance than newer models, but there's no hard and fast rule for how long an alternator will last. It varies from manufacturer to manufacturer.

You can take several easy steps to diagnose whether your alternator is on the fritz. First, most cars today have a dashboard light that glows when the ignition is switched on. This light usually is represented with a symbol of a battery. Have you ever heard a buzzing noise when the key is on, but the car isn't running? That's the voltage from the battery running through the charging system. If this bulb is burned out, chances are the alternator won't work. The car may start, but as we learned, it's just a matter of time before the battery drains and the electrical system fails.

As a rule, a three-phase alternator can operate with only one of the stator windings operational, although it's only one-third as efficient. To test whether your car had an issue with one of its stator windings, you'd need to use a voltmeter to check the voltage. (You can buy a basic voltmeter at an electronics store.) This is called a load test. Since the battery produces DC power, set the voltmeter to DC rather than AC. Connect the red lead (or wire) to the positive terminal and the black to the negative. With no accessories on, start the car and raise the RPM to around 1,000. The voltage should register around 14 volts. Anything less than 12 may indicate a problem. Next, turn on the headlights, air conditioner, radio and anything else that draws electrical power. Rev the engine and check the voltmeter. Again, the voltage should register around 14 volts. If you have a failing alternator, the voltage will be well below 14 volts. If so, it's time to replace the alternator.

Before you decide you need to yank the alternator and replace it, make sure you check the serpentine belt. If the belt is worn or loose, the alternator won't function properly. A bad belt is easy to replace and won't set you back much, usually less than $20. But if you have to replace the alternator, you have options. Read on to learn how to go about replacing an alternator and what it may cost in the next section.