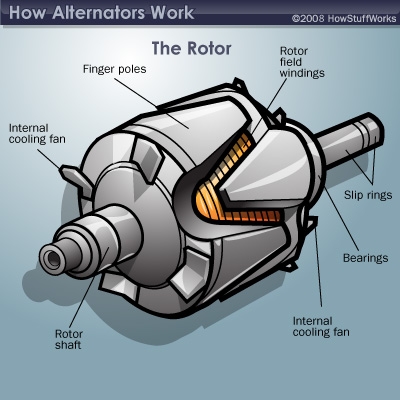 This is what you might see if you were to open your alternator.
HowStuffWorks

For the most part, alternators are relatively small and lightweight. Roughly the size of a coconut, the alternators found in most passenger cars and light trucks are constructed using an aluminum outer housing, as the lightweight metal does not magnetize. This is important since aluminum dissipates the tremendous heat generated by producing the electrical power and since the rotor assembly produces a magnetic field.

If you closely inspect an alternator, you'll find it has vents on both the front and back side. Again, this aids in heat dissipation. A drive pulley is attached to the rotor shaft on the front of the alternator. When the engine is running, the crankshaft turns the drive belt, which in turn spins the pulley on the rotor shaft. In essence, the alternator transfers the mechanical energy from the engine into electrical power for the car's accessories.

On the back side of the alternator you'll find several terminals (or connecting points in an electrical circuit). Let's take a look at those:

Cooling is essential to an alternator's efficiency. It's easy to spot an older unit by the external fan blades found on the rotor shaft behind the pulley. Modern alternators have cooling fans inside the aluminum housing. These fans operate the same way, using mechanical power from the spinning rotor shaft.

As we start to disassemble the alternator, we find the diode rectifier (or rectifier bridge), the voltage regulator, slip rings and brushes. The regulator distributes the power the alternator creates, and it controls the output of power to the battery. The rectifier bridge converts the power, as we'll learn in the next section, while the brushes and slip rings help conduct current to the rotor field winding, or wire field. Now let's crack the coconut open.

Opening the alternator reveals a large cylinder with triangular finger poles around the circumference. This is the rotor. A basic alternator is made up of a series of alternating finger pole pieces placed around coil wires called field windings that wrap around an iron core on the rotor shaft. Since we know the pulley attaches to the shaft, we can now visualize how the rotor spins inside the stator. The rotor assembly fits inside the stator with enough room or tolerance between the two, so the rotor can spin at high speeds without striking the stator wall. On each end of the shaft sits a brush and a slip ring.

As we touched on briefly, alternators generate power through magnetism. The triangular finger poles fixed around the circumference of the rotor are staggered, so the north and south poles alternate as they surround the wire rotor field windings. This alternating pattern creates the magnetic field that in turn induces voltage into the stator. Think of the stator as the catcher's glove as it harnesses all the power created by the spinning rotor.

All these components work together to give us the power we need to run our vehicles. Tesla captured this electrical energy and used it to light up cities, but we only need enough volts to power our stereo, lights, windows and locks. Let's take a look at how the alternator produces that power in the next section.