What is an alternator? 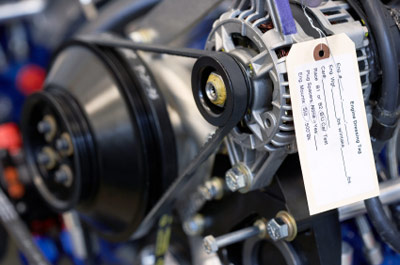 You can spot the alternator (with the tag hanging off it) in the foreground of this shot of a stock car engine. You can also see the serpentine belt looped around it.
iStockphoto.com/Michael Krinke

An automotive charging system is made up of three major components: the battery, the voltage regulator and an alternator. The alternator works with the battery to generate power for the electrical components of a vehicle, like the interior and exterior lights, and the instrument panel. An alternator gets its name from the term alternating current (AC).

Alternators are typically found near the front of the engine and are driven by the crankshaft, which converts the pistons' up-and-down movement into circular movement. (To learn more about the basic parts of car engines, read How Car Engines Work.) Some early model vehicles used a separate drive belt from the crankshaft pulley to the alternator pulley, but most cars today have a serpentine belt, or one belt that drives all components that rely on crankshaft power. Most alternators are mounted using brackets that bolt to a specific point on the engine. One of the brackets is usually a fixed point, while the other is adjustable to tighten the drive belt.

Alternators produce AC power through electromagnetism formed through the stator and rotor relationship that we'll touch on later in the article. The electricity is channeled into the battery, providing voltage to run the various electrical systems. Before we learn more about the mechanics of the alternator and how it generates electricity, let's look at the various parts of an alternator in the next section.

Nikola Tesla paved the way to modern electricit­y, yet Thomas Edison is revered as one of the greatest invento­rs of all time. Tesla and Edison were fierce rivals who faced off in the war of the currents in the late 1800s. While Edison is credited with inventing the first light bulb and had the power market cornered with his work on direct current or DC power, it was Tesla who developed the first AC induction motor and AC power. After George Westinghouse financially backed Tesla, the two sides jockeyed for position in the electricity market. Edison launched a propaganda assault against AC power, going so far as developing the electric chair to demonstrate the lethality of AC power. In the end, AC power won out, as it could travel much farther, produce more voltage and serve more customers more efficiently. Tesla's invention and pioneering work provided the foundation for the modern alternator.

A picture of the great man
Time & Life Pictures/Getty Images