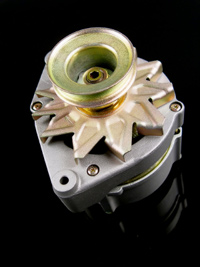 You may not have to replace your alternator entirely if you're handy in the garage.
iStockphoto.com/Bill Noll

For the most part, alternators are less expensive than say, a power steering pump or air conditioner compressor. Nevertheless, you have alternatives to forking out a lot of cash for a replacement alternator. Many automotive stores sell remanufactured or rebuilt alternators at a discounted price. For instance, a Beck/Arnley alternator for a 2002 Honda Accord with a 3-liter V6 engine can cost $229 new, versus $163 for the same part, only remanufactured [source: PartsAmerica].

While alternators are relatively inexpensive in comparison to some of the other components on your engine, some can be expensive depending on the car make. If you owned a 2005 Porsche 911 Carrera GT for instance and wanted to replace the original Bosch alternator, you could expect to pay well over $300, and that's for a remanufactured component [source: Autoparts Warehouse].

Sometimes alternators are easily accessible and simple to replace for the amateur mechanic. With a modest amount of automotive experience and the proper tools, replacing an alternator in your garage can be done. But more and more cars don't have room under the hood, and the alternators can be difficult to reach without first removing several other components. In this case, it's best to take your car to an experienced technician who can do the job quickly.

If you happen to own an alternator that has a repair kit available for sale, you can really save some money. Alternator repair kits run between $12 and $30, depending on which components you need to fix. Again, you need the proper tools and a little know-how, but if you're able to find the right kit and know what you're doing, you can rebuild an alternator for a fraction of the cost of even a remanufactured unit.

One thing is certain: A bad alternator will ruin a good battery if you don't address it quickly. Batteries can only be recharged so many times before they'll lose their ability to hold a charge. For the most part, if the battery isn't relatively old, it should survive. But an older battery that is constantly drained and charged, drained and charged will have a shorter life span than a battery operated under normal conditions. The average life span of a battery is usually around 48 months [source: Battery Stuff].

High-output alternators have become popular with custom car shops and in high-performance cars. They produce higher voltage at idle and make more power for vehicles that draw an excessive amount of electricity. For example, custom cars with lavish audio and video systems draw more electricity than the stock alternators can handle. As a result, companies such as HO Alternators make alternators for several makes and models. Some custom shops are even installing dual-alternator systems to handle the additional electrical loads seen in custom vehicles.