Change Your Oil at the Proper Interval 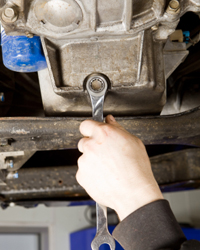 The risk of saving a few bucks on an oil change doesn't seem worth it -- why would you wait?
© iStockphoto.com/BanksPhotos

Conventional wisdom holds that you should change your oil every three months or 3,000 miles (4,828 kilometers), whichever comes first. That isn't necessarily true in every case -- some cars, and some oils, can go longer between changes, while others (like race cars, for example) should be changed more frequently. (Follow your manufacturer's recommendations for the proper interval.)

The "whichever comes first" bit is true, though it's often disregarded. So why is it important to change the oil so regularly, even if it's been sitting in a car that hasn't been driven?

Motor oil is subject to a condition called oil viscosity breakdown, in which the oil's structure gets damaged as it does its job. When the car is driven, the oil circulates through the engine, mashed between the grinding gears and other moving parts. The oil does its job by preventing extremely harmful metal-to-metal contact, but in the process, it's absorbing the brunt of all that moving metal. These conditions quickly destroy the oil's thickness, or viscosity, which is one of the oil's main qualities. (The viscosity is so important that oils are categorized by viscosity -- it's another way of describing the "weight" -- the numbers that you use to buy oil based on your manufacturer's recommendation.)

Once the oil starts to break down, it's increasingly less able to do the hard work of lubricating the engine. The oil's numerous additives and detergents also suffer over time -- they evaporate, they lose potency, or they're simply used up. So as the oil's lubricating properties are diminished, it's also less able to clean the engine's surfaces, help your fuel economy, trap contaminant particles, condition the engine's seals and generally keep your car in peak performing condition. The risk of saving a few bucks on an oil change doesn't seem worth it -- why would you wait?