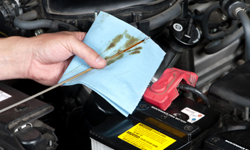 Buildup is actually comprised of unburned and partially burned fuel, metal fragments from engine component wear and dirt and debris that find a way inside your car's engine.
© iStockphoto.com/Joe Belanger

When you understand how and why motor oil deposits get lodged in your car's engine, you'll better understand the qualities and properties of the various oil options on the market, and the importance of choosing the right product for your car.

According to oil marketing company Castrol, the top causes of oil-related engine deposits are:

There are several different types of engine buildup, not all of which are caused by motor oil. Even when buildup is caused by another problem (condensation or leaky seals, for example), your engine's oil can contribute to the problem because as it circulates, it distributes contaminants and foreign fluids throughout the entire engine.

Buildup is actually comprised of unburned and partially burned fuel, metal fragments from engine component wear and dirt and debris that find a way inside your car's engine. Deteriorating piston rings and seals allow partially combusted fuel to escape, which also causes buildup. The deposits are carried through the oil until they find somewhere to settle, restricting or blocking the surrounding oil flow, which causes increased engine wear. Deposits are thick and gummy as they form, and often harden once they settle somewhere in the engine. Heat from the engine will quickly cook the deposits solid, and once a blockage spot is established, new buildup will often settle on top of it instead of allowing the oil to flow around it. Soon, there are hard layers of grime, which are difficult to remove. Prime targets for various forms of deposits include the fuel injectors, piston rings and valves, all of which will interfere with the engine's smooth and efficient operation.

In addition to its lubricating properties, oil helps clean the engine and prevent new deposits by dissolving sediment buildup and capturing debris.