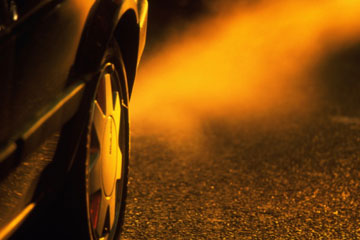 As far as engine performance goes, what comes out is just as important as what goes in. Exhaust systems aren't added on simply to control where emissions go. At its core, a good exhaust system can help an engine reach peak performance. Car makers want such an exhaust system, and this where the 4-2-1 exhaust comes into play.

First of all, why does this particular system go by "4-2-1"? The numbers refer to the exhaust pipe layout: Four pipes come off the cylinder head (or additional header), which turns into two pipes, and the system finally ends with one pipe leading to the catalytic converter and muffler.

The idea behind any exhaust system is to remove as much exhaust gas as possible from the cylinders quickly. The automotive term for this is "scavenging." Effective scavenging of exhaust gas increases an engine's overall efficiency.

Each time a power stroke happens in the engine and an exhaust valve opens, positive pressure is created in the exhaust manifold. And in between these positive pressures, negative pressures also happen, especially at lower speeds. As cylinders create these pressures at different times, they can interfere with each other and slow the release of exhaust gases.

On a four-cylinder engine, pipes 1 and 4 are tied into cylinders 1 and 4. Pipes 2 and 3 are tied into cylinders 2 and 3. The pipe lengths are designed to bring the exhaust gases to the juncture of where the four pipes turn into two at a predetermined time. Remember, cylinders 1 and 4 exhaust their gases at different times than 2 and 3. These gas pulses are timed, through the pipe length, to reach the juncture at a point where their passage helps each other along rather than interfering with each other. Once through, they head out through the single pipe, pass through the catalytic converter, and then leave the car by the muffler and out of the tail pipe.

4-2-1 systems, while common, are mostly used in general driving applications. Other cars, such as race cars, use a 4-1 system that boosts efficiency at higher revolutions. Whichever system is used, the idea is to increase efficiency within a given engine revolution range.

For lots more information on vehicle performance, see the links on the next page.

How Gas Compression-ignition Engines Work
If diesel engines are more efficient why do most cars have gasoline engines?
How is diesel fuel injection different?