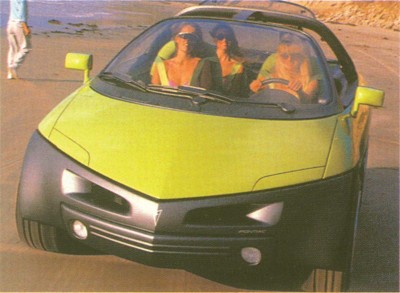 The 1989 Pontiac Stinger concept car continued a tradition of auto-show excitement at Pontiac. Year after year in the late 1980s, Pontiac's display models were a big hit with critics and show goers alike.

In 1987, for example, the performance-oriented Pontiac Pursuit concept car was a hot four-seat coupe. Then came the 1988 Banshee, which hinted at the 1993-2000 generation of Firebirds.

What to do for an encore in 1989? Turn to something completely different, of course; something like the rapidly emerging sport-utility vehicle marketplace. And do it in a way that suggests the great outdoors, fun and frolic in the sun. Send a message to young people that Pontiac has their interests and lifestyles in mind.

The result was the 1989 Pontiac Stinger concept car, and you didn't need a second look to realize that it's a youth-oriented sportster, guaranteed to capture the attention mainly of lively singles. Pontiac's general manager, J. Michael Losh, described it as "spirited, great-looking transportation for the under-35 car buyer or the young person in all of us."

Kinship to the old Volkswagen Beetle-based dune buggy is unmistakable -- but radically updated in concept to take advantage of modern technology.

For example, an active suspension system was designed to withstand tough all-terrain driving, delivering as controlled a ride as possible under rigorous conditions. Anyone who'd nearly flown off the seat of a Bug buggy was likely to welcome any improvement in that area.

Pontiac's goal was to create a car that mixed elements of an automobile, a jeep, a truck, and a van, aimed not only at the young but at the sports-minded who lead busy lives.

The 1989 Pontiac Stinger concept car was supposed to lead a dual life: serious during the week, but ready for fun as the weekend arrived. Designer Dave Ross said the design studio called it "an attitude car." They hoped it would be a "new form of transportation that is personalized and adaptable."

The 1989 Pontiac Stinger concept car sounded good in theory -- but how well did it fulfill its mission? Go to the next page to find out.