With the introduction of the 1989 Ferrari Mythos concept car, the fabled styling house Pininfarina broke tradition and declined to debut latest creation in Europe.

Instead, the company chose Tokyo's October 1989 auto show to unveil what may have been its most striking design study ever. Created for Ferrari, cementing the decades-long tie between the two companies, the Mythos was no myth, no fantasy. It was a real no-top speedster with a mid-rear 12-cylinder engine. Yet neither did it quite qualify as reality. Not for a while, at any rate.

Although based on the proven Testarossa chassis, the Ferrari Mythos concept car was strictly one-of-a-kind, playing on its own field. And yet, said chief designer Lorenzo Ramaciotti, the car's design could be "adapted to fill the needs of production... of tomorrow's cars." Sergio Pininfarina, the company chairman, called it an "advanced research prototype," meant to show that Italian styling was "on the crest of the wave."

There was not much doubt about that. Even superlatives seemed lacking when describing the lines of the Ferrari Mythos concept car. Best? Smoothest? Most beautiful? Maybe so; but more important, Mythos signaled a switch in basic approach to auto design, from the reality-based creations of recent times (which focused on new materials and technologies) back to the dreamy, elemental essences of form. In a word, it was a return to the "purity" of the dream.

Emphasizing the "relationship between volumes," according to the Pininfarina firm, the Ferrari Mythos concept car broke free of the traditional "linked panels." Although made up of two distinct elements, the stylists attempted to meld the pair into a single homogeneous form, one flowing into the other.

The main body, containing engine and rear-mounted radiators, served as one of the two masses. The extension that holds passengers and the car's nose was the other. Unlike the Testarossa, which used lateral grilles to minimize the relation of the two masses, Mythos tried to emphasize that contrast -- to highlight the obvious fact that they intersected.

The 1989 Ferrari Mythos concept car broke free from tradition in other ways, as we'll see on the next page. 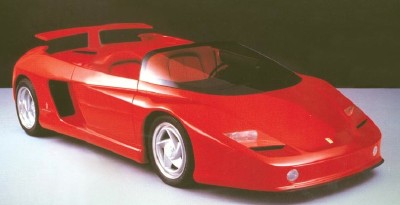 Like many futuristic concept cars of the 1980s, aerodynamics played a key role in the 1989 Ferrari Mythos concept car mechanical design. The rear wing spoiler, for one, could raise almost a foot (according to speed), to boost downforce. It also rotated 12 degrees, while producing a load of 331 pounds at 155 mph.

Instead of the usual correction techniques that affected either the front or rear axle alone, which upsets a car's balance, Pininfarina opted for one at each end. So up front, the retractable lip at the base of the bumper protruded a little over an inch to increase the downforce reaction of the dam. Both devices operated electrically, zipping into action at speeds above 62 mph. Each retracted when speed fell below 44 mph.

Ornamentation was about as minimal as in any design of the 1980s. Functional elements (bumpers, headlamps, spoilers) were integrated into the overall design, not tacked on later. No surface graphics were needed to identify a car that spoke for itself.

Within the Ferrari Mythos concept car lay a symphony of symmetries. Seat bases, for instance, reflected the flowing line of the simple dashboard. The twin-circumference pattern of the analog instruments repeated itself in the steering wheel. Controls sat on symmetrical stalks at the side of the instrument panel. That panel, the steering wheel, and pedals formed a single, depth-adjustable block.

The lack of window handles allowed the door shell to serve as an armrest, while door panels were of the most minimalist nature. Like the body, the two-seat interior, upholstered in red leather, was intended to recapture the spirit of racing "barchettas" of the 1960s. The instrument panel, facia, door panels, and seats were leather-covered shells.

Mechanicals for the Ferrari Mythos concept car came strictly from the Testarossa, including the 12-cylinder, 4942cc flat Boxer engine. Only the exhaust system had to be revised, because of the Mythos's shorter rear overhang. The tubular steel frame was also derived from Testarossa, but reinforced in this application. Hoods, doors, and body panels were made of carbon fiber.

Pirelli PZero tires carried the engines 390-horsepower to the ground: 245/40 ZR17 in front, and mammoth 335/25 ZR17s at the rear. Alloy wheels, derived from the basic Ferrari five-spoke design, displayed only the familiar prancing horse in their hubs; lug nuts were concealed.

With the creation of the far-from-mythical Ferrari Mythos concept car, the Pininfarina firm -- and Ferrari -- reached back to the tradition that brought forth such innovative models as the 250 PS (in 1968), the 512 S (1969), and the futuristic Modulo (1970). Fans of both art and automobiles surely welcomed a regression of that kind.

Go to the next page for specifications of the 1989 Ferrari Mythos concept car.

Drawing inspiration from past models, Ferrari and Pininfarina managed to create a vehicle both futuristic and traditional in the 1989 Ferrari Mythos concept car.
©2007 Publications International, Ltd.