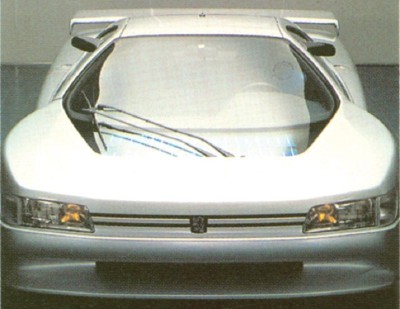 It could have, too, because unlike many prototypes and concept cars, the stunning 1988 Peugeot Oxia concept car was fully operational. And by operational, we're talking about a twin-turbo V-6 churning out a whopping 670 horsepower at an ear-splitting 8200 rpm. Even with all that superpower the Oxia wasn't a bone-shattering racing machine, but a comfortable, well-behaved motorcar.

"Dramatic" barely begins to define the 1988 Peugeot Oxia concept car's sharply angular profile. Wheels were pushed all the way out to the corners of the body, reducing front and rear overhang to a minimum. The short, plunging line of the hood -- led by slatted air intakes -- blended serenely into the vast windshield, with its generous and steeply angled expanse of glass.

The roofline's smooth curve continued rearward to blend at an elegant tangent with the tail. At the rear, a variable aileron looked ready to carry the Oxia off the ground -- perhaps into outer space, or maybe to send it burrowing down into the ground.

No less unique was a view of the car from the top, which showed a body that widened at the rear rather than remaining of similar breadth throughout its length. The cockpit narrowed sharply toward the roof.

It took a bit of squinting but, as interior stylist Paul Bracq pointed out, there was a definite family resemblance between the Peugeot Oxia concept car and real-world Peugeots -- and not just the corporate insignia at the center of the slatted grille.

The 1988 Peugeot Oxia concept car may have looked like it belonged in outer space, and that's where its name came from. Oxia Palus is the name of a region on the planet Mars that happens to be situated at latitude zero and longitude zero: the starting point for geographic measurements. Peugeot's Oxia, described as "making its earthly debut" in Paris, was viewed by some as a starting point for future performance vehicles.

To learn about the design of the 1988 Peugeot Oxia concept car, keep reading. 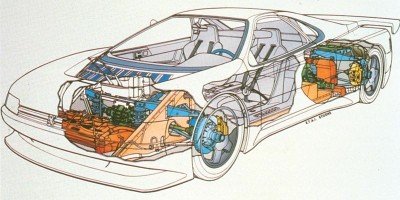 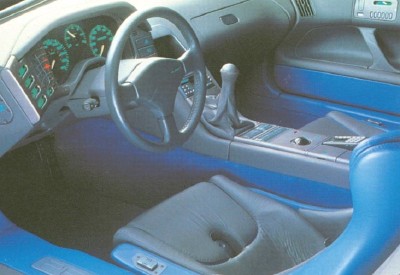 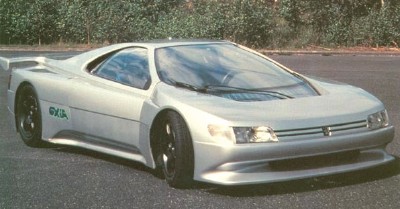 The 3,000-pound 1988 Peugeot Oxia concept car was a runner. Below its skin was a 670-horsepower V-6, all-wheel-drive, and four-wheel steering.
©2007 Publications International, Ltd.