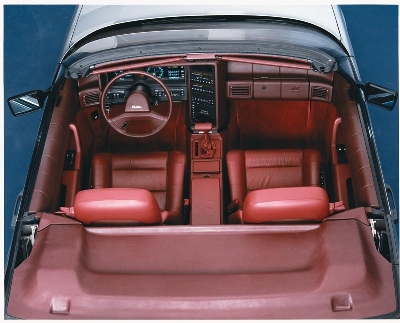 The leather-upholstered seats on the Allante looked cushy enough, but some found them a bit hard.
©2007 Publications International, Ltd.

Later in the program, Pininfarina provided interior and exterior styling bucks for Cadillac to "clinic" at a hotel in Anaheim, Calif. The participants, owners of Porsche 928, Mercedes, and Jaguar convertibles -- even some Ferrari owners -- reacted very positively.

"They liked the concept and didn't know it was a Cadillac," Anderson said. "We were going in the right direction."

Pininfarina hired and trained 25 young men not long out of high school to build the bodies at a new facility it had built in rural San Giorgio, Italy, some 20 miles from Turin. "Their work ethic and mechanical skills were utterly phenomenal," said Bill Buschman, who was operations director for Allante manufacturing there.

"But we did have our problems," Buschman said. "They were not accustomed to the dimensional control standards we required in the body shop. They eventually put in a robotic checking device that checked dimensions down to thousands of an inch, which was critically important. Also, their paint shop was made to European standards."

As Buschman pointed out, the definition of quality had different meanings in Detroit and San Giorgio. "To [the Italians], if a car ran like the dickens and had great styling, it was a high-quality car. If a few things didn't work, and the doors didn't quite fit, and the paint had a little dirt in it, those things were not too important to them.

"That was a tremendous gap that we had to get over. Eventually, they totally redid their facilities and put in a new paint shop, but it was tough at the beginning," he said.

At first, all welding in the body shop was done manually. "Later on," Buschman continued, "we got a multiple-head robot that did a bit of the welding, but the bulk of it was still done manually. The last line in the body shop was the metal finish line, where all the major parts were hung by hand. While one person would hold the door, for example, another would be bolting it on. But all the metal finishing was done very meticulously.

"When each car came out of the paint shop, a group of inspectors would mark any kind of defect whatsoever. Then they would take a little razor blade and shave off the head of any defect or piece of dirt, lightly sand it and polish it, and then buff out the entire car. Eventually, when we got a much more sophisticated paint system, that wasn't necessary.

"We always had a concern about dust getting on the car, because if it did and an operator was working on it later, he could scratch the finish. So they wrapped all the horizontal panels -- the decklid, hood, and hardtops -- in clear plastic wrap so no dust would get on them.

"Even with that, they immediately cleaned and vacuumed off the cars when they came in, so there was no dust or grit whatsoever going through the trim operation. And talk about craftsmanship: In the trim shop, I have never seen anything to match that in all my days," Buschman explained.

See the following page for how the Allante was produced.

"The amount of craftsmanship, the amount of work that went into repair in the paint shop was just phenomenal. They were as skilled at that as I had ever seen anywhere."