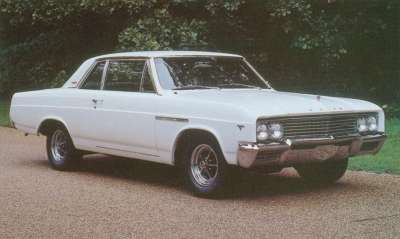 The 1965 Buick Gran Sport's lineup was completed by a fixed-pillar coupe.

Putting the 1965 Buick Gran Sport's power to the road was the standard mix of transmissions available at the time: three- and four-speed manuals, and a "Super Turbine Drive" two-speed automatic.

Out of 15,780 Gran Sports produced the first year, the three-speed was, understandably, the least popular with only 1,132 made. The four-speed was second in popularity with 4,289, while the automatic was the surprising overwhelming favorite with 10,359 ordered.

The only concession to the extra power was that the Gran Sports were built on the convertible's sturdier frame. The suspension was also modified with a fatter antiroll bar in front and a control arm suspension in the rear to limit axle hop and side-to-side movement. Finishing up the package were special bushings, springs, brakes, and wheels.

Straight-line performance was the goal, though, and the Skylark Gran Sport offered that in spades. A Gran Sport driven by a capable driver could attain 60 mph from a standing start in 6.8 seconds and cover the quarter mile in 14.9 seconds at a top speed of 95 mph. Even with the automatic, 0-60 times were in the mid-seven-second range. Car Life took 7.4 seconds in the 0-60 run, while Motor Trend took 7.8 seconds.

"In typical Buick fashion," wrote Marty Schorr in GNX Buick, "the Skylark GS was more conservative in appearance than the GTO and did not benefit from extensive performance and dress-up option lists. However, the Skylark offered comparable handling and performance qualities which the GTO owners discovered, much to their dismay."

Badging helped distinguish the Gran Sport from other Skylarks. Red "Gran Sport" badges adorned the rear deck and grille, as well as the roof sail panels of two-door hardtops and fixed-post "thin-pillar" coupes, or the rear fenders of convertibles. There was even a "Gran Sport" badge on the dash.

The Skylark Gran Sport package, which cost around $250, also had bucket seats (a $70 "mandatory option") for its driver and front passenger, and a bench in the rear. The shifter was on the floor, no matter which transmission was installed. Among the options were a tachometer, air conditioning, and 14-inch versions of Buick's five-vane "Wildcat" sports wheels. In that less safety-conscious era, the seat belts could be deleted for credit.

Buick advertised the Skylark Gran Sport as "A Howitzer With Windshield Wipers." One ad read "You don't tuck a Wildcat V-8 into just any cage."

Another said "Some people might think a whacking big 400-cubic inch, 325-hp Wildcat V-8 alone is worth the price of admission to a Skylark Gran Sport. Not us Buick People. We had to go and lock that engine to a heavy-duty suspension, a floor-shift 3-speed that's synchronized in all forward gears, and the kind of steering and handling that'll make you want to leave home at the first hint of an open road."

The hardtop garnered the most orders with 11,351 produced. The coupe was next with a mere 2,282 produced, followed by the convertible with 2,147 produced.

To follow the changes introduced for the 1966 Buick Gran Sport, continue on to the next page.