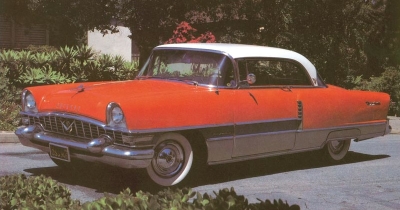 Though far from completely new, the 1955-1956 Packard Patrician/Four Hundred/Executive received probably the most revolutionary face-lift of the 1950s. It represented a significant departure from previous practices, not only in styling, but in engineering as well.

Those who condemn James Nance as a wrecker of the company are obliged to tell us what the old management he replaced would have delivered by 1955: As one Packard writer put it, there would probably have been nothing left but a $2,300 Clipper sedan, powered by the only straight-eight engine left in the world.

It was on this last feature that Packard hung its 1955 advertising slogan, "Let the Ride Decide." Torsion bars had been tried before, but never had they been mounted longitudinally, without anchor points, working on all four wheels. They provided a remarkable combination of ride and handling, scaling even car-breaking railroad crossings with aplomb.

And as one Packard enthusiast likes to point out, "most of them are still leveling away more than 50 years later."

The new V-8, a solid design, boasted the highest horsepower in the industry save for the Chrysler 300. Enlarged to 374 cubic inches in 1956, the big Packard V-8 saw use in the Studebaker Golden Hawk, several drag racers, and even marine applications. More controversial was Twin-Ultramatic transmission, named for its combination of gear-start and torque converter, designed to handle the V-8's formidable power.

With Twin-Ultramatic the car started in low, then shifted to high via a band release and clutches; at cruising speed the converter locked up (as became common in the 1980s). Its weakness centered on the complicated linkage used for the low-to-high shift.

Unless properly set up -- tricky for most independent garages, and for owners once Packard dealers began disappearing -- the high clutches would burn up. Also, Twin-Ultramatic kicked down too slowly at mid-range rpm, which caused lugging and resultant engine problems.

Though serious Packard collectors would have nothing else, most defenses of Twin-Ultramatic seem to contend that it would have worked fine if it had the kind of factory service and support enjoyed by TorqueFlite or Hydra-Matic. Most judicious is this comment by a respected Packard writer: "Properly set up, properly driven, and properly maintained, it was among the best available. But it was unforgiving of a lapse in any one of these requirements."

Go to the next page to learn about styling on the 1955-1956 Packard senior models. 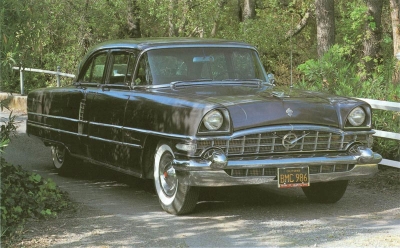 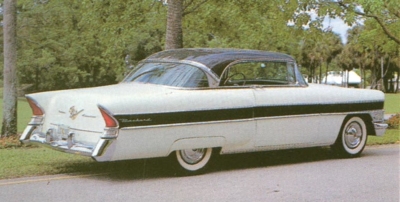 The Executive, available in 1956, was a smaller, less-powerful version of the senior Packards.
©2007 Publications International, Ltd.

The 1955-1956 Packard Patrician/Four Hundred/Executive were stylish cars for their time, but they ended up being Packard's last-ditch effort.