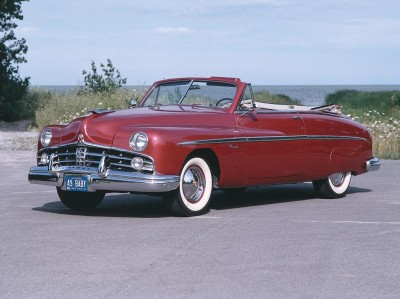 1949 Lincoln Convertible Coupe was the first in the line of smaller Fords. See more pictures of Lincoln cars.

The names Lincoln and Mercury have long been linked in corporate planning at Ford Motor Com­pany. As products, though, the two brands were perhaps never closer than they were in 1949, producing the 1949 Lincoln Convertible Coupe.

Ford's first all-new cars since before World War II came out for '49, includ­ing two lines of Lincolns. At the top sat the Cosmo­pol­itan series, with four distinctive bodies. The base series shared its shells with Mercury, however. In fact, as originally conceived by stylist E. T. "Bob" Gregorie, the "baby" Lincoln was supposed to be the new postwar Mer­cury (and the Merc the new Ford). Then a rethinking by Ford's new management team boosted all the lines up a step, allowing for a line of smaller Fords to be created.

The entry-level '49 Lincoln came in three body styles: coupe, four-door sedan, and convertible. They shared the Mercury's roof lines, divided windshield, and front fender line that faded into the doors near the body midpoint. However, "9EL"-series cars sported the "frenched' headlights, "frowning" grille, and circular taillights that visually linked them to the Lincoln Cosmopolitans.

Then, too, both Lincoln branches shared a powertrain -- and it was new. Gone were the V-12s of the Zephyr years, replaced by a 152-bhp "flathead" V-8 displacing 336.7 cubic inches. It was driven through a three-speed manual transmission (though General Motors's Hydra-Matic automatic became a late-season option).

At 121 inches, the base Lincoln's wheelbase was four inches shorter than the Cosmo's -- but three inches longer than Mercury's. All shared in the corporate shift to independent front suspension, semi-elliptic rear leaf springs, and open driveshafts.

Introduced in April 1948, the two Lincoln series accounted for more than 73,000 cars for the long model year. They were face-lifted for 1950 (and again for '51), but the $3,116 base-series convertible would not return after that first season.

William Harper, of Lin­wood, Michigan, owns the rare "baby" Lincoln ragtop seen here. Outfitted with optional fog lamps and overdrive, its first owner was a Minne­sota physician, who kept it until 1979. Harper purchased it from the second owner in 1990. Since then, he has overhauled the engine and returned the paint and top to their original colors.