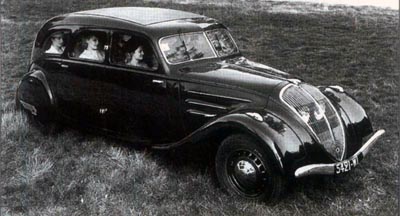 The 1935 Peugeot 402 Familiale was on a  wheelbase. See more pictures of classic cars.

The development of the 1935 Peugeot 402, like many of its contemporaries, was heavily influenced by the principles that governed efficient air travel.

The Wright Brothers' pioneering airplane flight in 1903 not only opened the way for mankind's mastery of the skies, it also infused the technological world with the dream of flying. Very soon it was realized that the shapes of a plane's surfaces had an important influence on power and economy.

This gave way to trendy "streamlined" styling for all manner of vehicles -- and even things that didn't move, like household appliances. But apart from a few sensational prototypes, common motor cars continued to look more like boxy carriages into the mid-1930s.

A big change came when Walter Percy Chrysler's company introduced the brand-new Airflow models in 1934. Designed by Carl Breer, the Chrysler and DeSoto Airflows were characterized by a body with rounded nose and "waterfall" grille, integrated headlamps, and separate angled windscreens reminiscent of a period airplane cockpit. It wasn't just the unusual streamlined styling of the Airflow that made it a sensational new car.

Girder-like semi-unibody construction, an engine positioned more forward for improved weight distribution, rear seats set within the wheelbase for a more comfortable ride, and many other details were forward-looking. But for all its inherent advantages, acceptance of the Airflow was limited.

Many didn't like the radical styling. Others were put off by rumors (mostly unfounded) of technical problems that were spread when the car's production got off to a slow start. DeSoto gave up on the model in 1936. Production of Chrysler-badged Airflows lasted until summer 1937. More conventional Airstream models, hurriedly launched for 1935, kept Chrysler Motors from disaster.

Meanwhile, on the other side of the Atlantic Ocean, the introduction of the Airflow was being watched with great interest in a most unlikely quarter: Peugeot, a manufacturer known even today for conservative design.

With its headquarters in Paris and its main factory in Sochaux in Northeast France, near the Swiss border, Peugeot is one of the world's oldest automakers. Company history dates to the very early 19th century, when the Peugeot family began producing goods that over time would come to include tools, coffee and pepper mills, kitchen utensils, bicycles, and much more.

In 1889, the firm showed its first passenger car -- a Serpollet-powered steamer -- at the "universal exposition" held in Paris. Soon after came a Type 2 Peugeot, this time with an internal-combustion engine built in France under license from Gottlieb Daimler.

In 1896, Armand Peugeot, one of two cousins then running the family firm, spun off the still-speculative automobile business from the established industrial concern. Later, his nephews, who inherited the old-line family business, would begin manufacturing motorcycles and light cars on their own, but a merger in 1910 brought all Peugeot motor vehicle operations under one roof again.

By the 1930s, reliability and robustness were two words commonly associated with Peugeots, but in styling and technology the cars conformed to mainstream European standards. Then, in 1934, the continent's automakers were roused with a jolt: André Citroën introduced the Traction Avant that marked the start of an era with its front-wheel-drive design, flat cabin floor, and unitized body without running boards.

Here, from within France itself, came a challenge Peugeot designers would accept. Caught up in the contemporary fascination with aerodynamic streamlining, the talented Peugeot engineers would not hesitate to produce a second sensation based on the look of the American Airflow.

This Peugeot was given the model number 402. To learn about the 1935 Peugeot, continue to the next page.