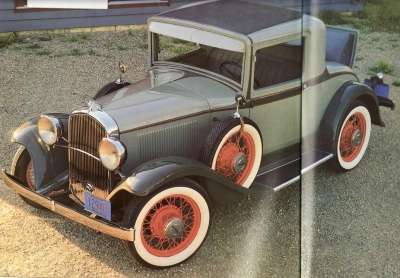 The 1932 Plymouth PA Rumble-Seat coupe was the  Plymouth to feature a front grille. See more pictures of Plymouths.

The 1932 Plymouth PA Rumble-Seat coupe helped increase Plymouth sales, which had been down because of the Depression. In fact, auto sales crashed to their lowest level since the production-limited days of World War I in 1918. But Plymouth bucked that trend, moving from from seventh place in sales in 1930 to fourth in 1931, and third in 1932. Aggressive pricing, astute marketing, and a quality product had fueled the rapid rise.

The Series PA, which bowed on July 11,1931, was considered a 1932 model. Borrowing its Safety-Steel body from the '31 DeSoto SA and Chrysler SM, Plymouth was a step ahead of Chevy and Ford in eliminating structural wood, and a double-drop frame lowered overall height to 67 inches, making the Plymouth look longer than its modest 169-inch length.

The second taillamp and luggage rack on the 1932 Plymouth PA Rumble-Seat coupe came at an extra cost.

"Floating Power," with rubber-cushioned mounts strategically placed along the engine's center of gravity, provided "the Smoothness of an Eight and the Economy of a Four." This Plymouth exclusive was soon widely imitated. Also featured were an Easy-Shift transmission with a "silent" second gear and, for $20, Free Wheeling. Closed bodies carried a built-in aerial inside the roof for the few who could afford the Philco-Transitone radio.

The PA was the first Plymouth to feature a grille, and its vertical "radiator louvres" could be finished in chrome rather than paint. Also of note were a stylish "flying-lady" hood ornament and an oval rear window. Powered by a 196.1-cid, 56-horsepower L-head four, the 109-inch-wheelbase PA boasted eight horses more than the previous Series SOU. The 11 PA models ranged in price from $495 to $690.

The two- and four-passenger coupe sold for $610; the second taillamp, luggage rack, and dual sidemounts cost extra. Of the 105,095 Plymouth PAs built during the short model run (the PB bowed in April 1932, also as a '32 model), 9,696 were rumble-seat coupes. One beautiful coupe, owned by Eugene W. Brotzman, of Mazomanie, Wisconsin, was stolen by a 72-year-old woman, and it took him two years to recover his prized Plymouth before he could restore it in 1983-1984.