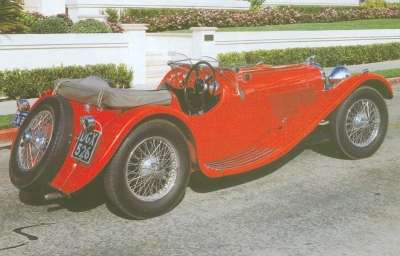 For the new cars, a new name: Jaguar. Lyons had wanted something more evocative than SS (in 1935, the letters had not yet acquired their other unsavory connotation) for the 1935-1940 Jaguar, and had asked for a list from the Nelson Advertising Agency. Nelson responded with a list of birds, fishes, and mammals; Lyons's immediate choice was Jaguar.

Curiously, the new name was incorporated into the existing winged SS badge (officially, the cars were "SS Jaguars" at this point) which bore some resemblance to the later Ford Thunderbird nameplates. The cat's-head badge and famous pouncing-cat radiator mascot -- the latter designed by artist F. Gordon Crosby and referred to as the "leaper" by English Jaguarphiles -- came later.

If the SS Jaguars' appearance, performance (with the possible exception of the 1.5-liter models), and name weren't enough to attract customers, the prices were the clincher. From a mere £285 for the "1 1/2-liter" sedan, to £385 for the 2.7-liter sedan (always advertised as a "2 1/2-liter" model), to £395 for the SS100, the SS Jaguars were far less expensive than their competition -- sometimes by half -- and equal to most in quality. Sales were brisk, making 1935 the company's most profitable year yet.

Lyons poured much of the income back into the products, making the necessary -- but initially costly -- change from the old coachbuilt convention of steel panels over wooden frames to all-steel construction for the 1937 models. This move, which would ultimately cut production costs dramatically, nearly drove SS Jaguar into bankruptcy.

Stamped body panels were provided by several companies, and when the early pieces were set up on jigs to be welded into units, they didn't line up. The work necessary to salvage the panels -- and corrective measures taken by suppliers -- slowed production to a crawl, and sent profits plummeting.

But customers were still eager to buy when the problems were at last corrected. The 1938-1939 season was very good for SS Jaguar; the entry-level 1 1/2-liter, now with an ohv engine, was the top seller, but sedans and SS100s with 2 1/2-liter and 3 1/2-liter engines were turned out in substantial numbers as well. (The open four-seater was retired after 1937, but new convertible coupes with any of the three engines chokes were offered.)

Everything was looking up for Lyons's company and no one would have thought it odd if the proprietor had decided to ease up a bit. But 1939 was not a good year for relaxing. Even before Germany's invasion of Poland triggered World War II that September, the British government had gotten SS Jaguar into war work.

Although a few hundred civilian cars were completed for 1940, the firm took up contracts to service a variety of aircraft and manufacture trailers, truck canopies, and parts for new aircraft. Among SS Jaguar's most successful wartime products were motorcycle sidecars.

William Lyons made several moves in anticipation of war's end. Top priority was given to a name change: SS Cars, Ltd., became Jaguar Cars, Ltd., in 1945. He had already sold off the Swallow sidecar business the year before; it was carried on by others for a time, though the heyday of motorcycle "combinations" for civilian and military use had passed.

Neither funding nor materials for tooling up new designs were available in 1945, so when car production resumed, the prewar sedan lineup was continued, followed in 1947 by convertibles powered by a choice of the two largest engines. Lyons had wisely purchased the tooling for the ohv sixes from Standard's Captain Black during the war; this eventually led to a small rift between the two men, but assured Jaguar a steady supply of powerplants.

Just over the horizon in 1948 lay a new engine, first pondered by Lyons and his engineers during their wartime fire watches at the Coventry works, but not actually designed by Bill Heynes, Wally Hassan, and Claude Bailey until 1946. With its arrival, and the subsequent debut of the XK120, the transformation from sidecar constructor and coachbuilder to one of England's major auto manufacturers was complete.