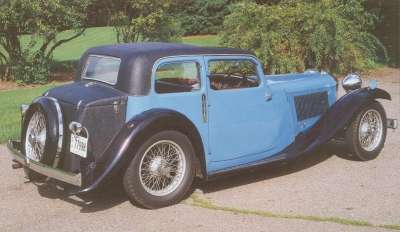 When Standard, a recipient of Swallow bodies since 1929, agreed to provide a chassis, Lyons's hopes of making his own car took off.

To modern eyes, the first 1927 Austin-Swallow may look rather strange. It is tall and narrow (as was the standard Seven) on its spindly wheels. But it was decidedly more sporting in appearance than Herbert Austin's original, and attracted immediate attention.

It had more than the body shape to recommend it: The seats were upholstered in leather, the instruments (such as they were) were mounted in a polished mahogany dashboard, and a choice of hard- or soft-tops was offered. A Swallow conversion virtually doubled the price of a bare Seven chassis, from £99 to £190.

Despite the need for a few changes (the cycle fenders on the prototype and the early hinged hardtops broke away from their mounts and were replaced by more conventional fender-cum-running boards and bolt-on fixings, respectively), the Austin-Swallow was a hit. In August 1927, a Swallow body for the large Morris Cowley was announced.

The company did have one major problem, however, and Lyons's publicity and dealer-signing efforts were making it worse: The Blackpool factory was simply too small to allow output to keep up with orders, and the location away from industrial centers made deliveries of raw materials and chassis expensive.

Matters came to a head when Lyons signed a contract to deliver 20 Austin-Swallows per week to Henly's of London, which ordered 500 chassis from Austin to get him started. Henly's also asked for a two-door sedan version of the car. William Walmsley must have been wondering what he had let himself in for, as he reportedly considered the Henly's deal "quite mad."

His reaction to Swallow's move to Coventry in November 1928 is unrecorded. But the move was made (to a building formerly used to fill artillery shells with explosives) and production was increased to some 50 cars per week.

Lyons, unsure of Herbert Austin's continued willingness to make bare Seven chassis available, began to look at other cars suitable for the Swallow treatment. The Morris connection had not worked out, due in part to the emergence of the Morris-based MG, but Lyons arranged with the Glasgow Fiat dealer to rebody some obsolete and slow-selling Fiat 509As in 1929. Perhaps as many as 100 of these were built.

These production numbers, when added to the regular flow of Austin-Swallows and sidecars, show just how far Lyons and Swallow had come in a relatively short span of years. And it should be noted that the various chassis being bodied were sufficiently dissimilar in size and shape to require unique panels. If there were familial design features (and there were), there was no interchangeability.

Style was not the only reason for Swallow's success; price had much to do with it as well. There were, after all, dozens of companies offering custom coachwork in England at the time, but the Swallow bodies were, thanks to quantity production and Lyons's tendency to squeeze the maximum out of every pence that came in, less expensive than most. At the same time, they were among the best in terms of body engineering and build quality.

It was characteristic of Lyons that, despite his parsimonious ways, employees were paid well. They were treated well too, though Lyons was not the kind of man who went through the factory slapping backs and making small-talk with his workers. Just the opposite, in fact; the very formal boss tended to address all by their surnames and discourage undue familiarity. Walmsley was said to be more personable. Nonetheless, a significant number of employees enjoyed long careers with Lyons.

An important connection was made when the first Standard-Swallow, a four-cylinder car, was displayed at London's Olympia Motor Show in 1929. Initially, the new body was not to Lyons's liking, as the shape of the cowl -- high and thin to match the form of the Standard radiator -- was awkward.

By the time production began, the cowl was redesigned and a Swallow-designed radiator shell was attached. In this form it caught the eye of Standard's chairman, Captain John Black, whose own in-house designers quickly came up with a similar radiator for their own cars. Come 1931, Swallow would also be producing its distinctive bodies for the six-cylinder Standard Ensign.

Follow the story of the Swallow Sidecar Company into the 1930s by continuing to the next page.