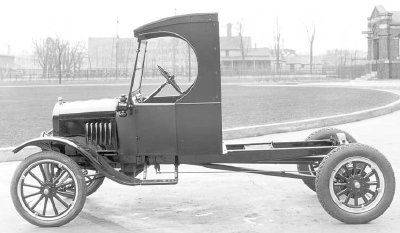 Ford trucks underwent important changes in 1924. Prior to 1924, Henry Ford sold his Model TT trucks as rolling chassis, leaving the body business to aftermarket companies. This attitude changed that year when Ford's first factory-catalogued truck was offered as the Model TT with Express (pickup) Body.

For light-duty use, a Model T chassis was still available. Note the oval-shaped fuel tank that was fitted to Model Ts beginning in the early 1920s.

A canopy top covers the wood-panel body of this Ford Model T passenger vehicle. The side-mounted spare tire is fitted to a demountable rim.

A 1924 Model T with panel body shows off that year's styling changes, which included a taller radiator and hood. It was owned by the Pioneer Tea Co. of Detroit.

Ford truck bodies again evolved in 1925. Read about 1925 Ford trucks in the next section.