Browse the article How to Change a Fuel Filter 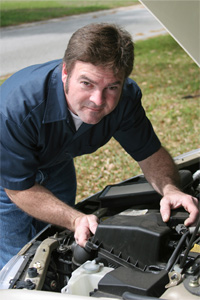 If you’re feeling handy (and poor), you could try changing the fuel filter yourself, provided it’s not located in a hard-to-reach spot.
© iStockphoto.com/lisafx

You're heading down the interstate when you see an eighteen-wheeler merging into traffic. As you hit the gas a little to pull ahead and give the truck some space, you feel your car shudder a bit. By the time you reach home, you've forgotten all about it. A month later, however, your car stalls out at a red light. You manage to start it up again and limp home, but this time you're determined to find out what's going on.

Numerous things could be causing your car's problems, but a clogged fuel filter is a likely culprit. In fact, a clogged fuel filter can eventually keep your car from running at all. While some manufacturers claim that a fuel filter should last the life of a car, many mechanics recommend you change the filter as frequently as every 12,000 miles (19,312 kilometers) [source: Chaikin].

Your car's fuel filter is located between the fuel tank and the fuel pump. As the fuel pump pulls fuel toward the engine, the fuel filter removes any impurities that could clog your fuel injectors and keep your car from running smoothly (or at all).

If you're like many consumers, the dismal economy might have you doing some routine auto maintenance work that you would have left for the professionals in years past. So where does changing a fuel filter rank between installing a cigarette lighter and rebuilding an engine? The answer depends largely on what kind of car you have. For some cars, the job is fairly simple, but for other cars, the filter can be part of more complicated systems, requiring considerable expertise to change. In fact, the Car Care Council, a nonprofit organization dedicated to helping people properly maintain their cars, recommends letting a licensed professional do the work since fuel filters are often located in hard-to-reach areas [source: Car Care Council].

Read on to learn about what tools you'll need for the job, as well as the basics behind changing your fuel filter. 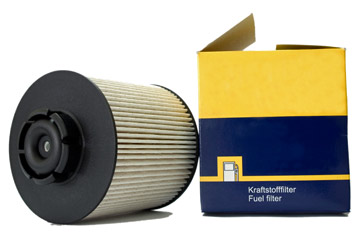 Here’s what you’re ultimately looking for when you search for the fuel filter.
© iStockphoto.com/draskovic

Changing your fuel filter typically requires only some simple tools like wrenches, sockets, screwdrivers and pliers. Of course, the specific tools you'll need depend on the way your fuel filter is attached to the fuel lines. For instance, if the fuel filter has threaded connectors, you'll need an open-ended wrench or ratchet and socket to remove the filter. If the filter is connected with clips, you may only need a pair of pliers to get the job done. A flashlight can be handy, particularly if the fuel filter is located in a hard-to-reach area of the car.

Depending on the car, you may also need special tools made just for removing fuel filters. For instance, some GM, Ford and Mazda cars have spring-loaded locking fuel filter connectors that require a "quick disconnect" tool to release. You'll likely need to consult a service manual or find details about your car online to determine exactly what tools you'll need for the job. Lastly, keep some cleaning supplies nearby to clean up the work area once you've finished.

Oh, and don't forget to purchase a new fuel filter before you start the job. Fuel filters are made by a wide variety of manufacturers and can be purchased at your local auto parts stores. While a store attendant can help you find the correct filter, you'll need to tell the attendant the specific year, make and model of your car or risk getting the wrong part.

Some common manufacturers of fuel filters include ACDelco, Fram and Motorcraft. A new fuel filter ranges in price from as little as $5 to upward of 10 times that amount. Most filters should be under $15 dollars, however, making them a much cheaper option than replacing a fuel pump down the road. It's worth noting that not all cars have replaceable fuel filters. In such cases, the filter is built into the fuel tank, fuel pump or other assembly, meaning you or your mechanic will likely need to replace the entire assembly if the filter needs maintenance.

Preparing Your Car for a Fuel Filter Change

Regardless of how complicated the job may be, safety should always be your first priority if you decide to take on the job yourself. Even if you're careful, changing your fuel filter will release flammable fumes and small amounts of fuel. Accordingly, make sure to work in a well-ventilated area and clean up any fuel spills as quickly as possible. Ideally, you should replace your fuel filter outdoors, since fuel fumes are heavier than air, they can accumulate in enclosed spaces and pose a fire hazard.

In addition, wear safety goggles and disposable nitrile gloves to keep gasoline from getting into your eyes or being absorbed by your skin. Nitrile gloves are a bit more expensive than latex gloves, but they offer much better protection from solvents like gasoline, making them ideal for the job. And of course, don't smoke or work near open flames like pilot lights when you're working on your car's fuel system. Keeping a fire extinguisher nearby is a great idea as well.

Depending on the location of your car's fuel filter, you may also need to put your car on jack stands before you can access the filter. If this is the case, apply your car's parking brake and place blocks against the wheels that will remain in contact with the ground. The last thing you want is for your car to start rolling while you're underneath it. Make sure to consult your car's owner manual to determine the safest place to apply the jack. Once you've got the car high enough in the air, replace the car's jack with jack stands. Otherwise, you'll be put at risk if your jack fails during the job. Once you've safely put your car on jack stands, you're ready to remove the old fuel filter. Read on to find out how. 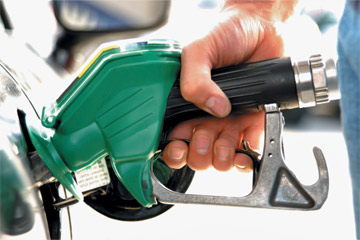 Your fuel filter could be located near the gas tank or closer to the engine.
Cocoon/Getty Images

Fuel filters typically connect with the fuel line in two places, the intake side and the outtake side, and the entire assembly is held in place with a mounting bracket. Your car's fuel filter can be located anywhere along the fuel line, meaning it could be at the back of the car near the gas tank, or under the hood closer to the engine.

After you've located the filter, you'll need to relieve the pressure in the fuel line; otherwise, fuel can spray everywhere, creating a safety hazard and a huge mess in the process. You can relieve the fuel pressure a number of different ways, but a common method involves removing the fuse for the fuel pump and running the engine until it dies.

The next step is to disconnect the negative terminal of your car's battery to minimize the chance of a spark igniting gas fumes. Next, examine the fuel filter to determine how the fuel line is attached. In some cases, clips hold the fuel line onto the filter. In other cases, "banjo bolts" or other specialized fasteners connect the fuel line to the filter. Make sure to pay special attention to any washers or O-rings on the connection assembly. While the replacement fuel filter will typically come with new connecting hardware, you'll need to know how everything fits together when you install the new filter.

Now you're ready to install the new filter. Most filters will have an arrow indicating the direction fuel should flow through them, so make sure you don't install the filter backward. In some cases, the fuel filter will only attach to the fuel lines in a certain direction, so putting the filter on backward isn't a problem. Otherwise, you may need to trace the fuel lines to see if they lead to the engine or toward the fuel tank in order to determine the installation direction. Better yet, check the arrows on your old filter before you remove it and install the new filter the same way.

Once you've secured the filter to the mounting bracket, reattach the fuel lines using any new hardware included with the filter. You might be tempted to reuse clips that held fuel lines to the old filter, but those clips will weaken over time and can create a poor seal between the filter and the fuel lines.

Speaking of fuel lines, take the time to check them closely; if the lines are old and cracking, you'll need to replace them. Once the new filter is in place, simply replace the fuel pump fuse, reattach the negative battery terminal and start the engine. Your car might not start up right away, but don't be alarmed. The pressure in the fuel lines was released during the installation of the new filter, and you'll probably need to try to start the car several times before the pressure rebuilds and your engine can start.

After the car is running, check for leaks, clean up any fuel that spilled during the installation process and pat yourself on the back for properly maintaining your car's fuel system.

Keep reading for more tips on taking good care of your car.