How do hybrids utilize eco-plastics? 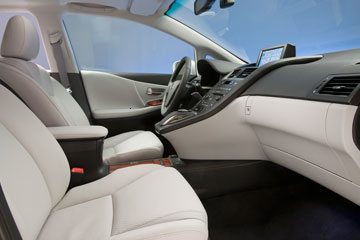 With about 250 pounds (113 kilograms) of plastic in the average car, the auto industry is doing its part to fill the world's trash heaps [source: CCC]. When that average car outlives its usefulness, all that fossil-fuel-based plastic ends up in one of two places: either recycled into other plastic parts, releasing tons of carbon dioxide in the process, or spending anywhere from a few hundred to a few thousand years in the average landfill, where it proceeds to take up space and leach harmful chemicals into the air, soil and water supply.

If only our plastic floor mats were made from corn starch instead of fossil fuels. If only we were in the market for a new kind of hybrid.

Named and known for their combined power sources, upcoming hybrid car models are not just running green; they are made green. Going beyond increased gas mileage and high-tech perks like color-coded driving-efficiency alerts, carmakers are moving into the realm of eco-friendly building resources like bioplastics, also known as eco-plastic.

The automobile eco-plastic currently in production is bioplastic, and it's a lot like the regular stuff that currently makes up most car interiors -- it looks the same, feels the same and stands up to the same stressors. The difference is in how it acts after we're done with the car. Plant-based eco-plastic, usually made from corn, sugar or cellulose derivatives, not only degrades faster than the plastic made from fossil-fuel derivatives, but it's also made from sustainable rather than finite resources and has a smaller carbon footprint because the plants that comprise it consume CO2 as they grow.

In this article, we'll find out what hybrid cars are doing with eco-plastic and see what the future holds for this green trend.

We'll start by looking at perhaps the most famous hybrid car in the world: the Toyota Prius. In plastic as in power, Prius is leading the way. 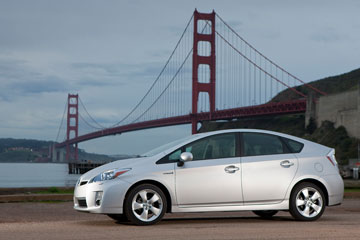 Gas efficiency is a top environmental concern, but it isn't the only one. Hybrids aren't just about mileage anymore. They're going beyond the power train to be eco-friendly all over, including in the materials that comprise them.

Renewable resources are all the rage in the auto industry -- or at least in one niche market. The car buyer who heads straight for the hybrid is often concerned with the eco-credentials of the whole car. That's probably why these eco-plastics are turning up in hybrids first: The market is already there. If eco-plastic turns out to be a cost-effective, successful feature in car manufacturing, it may someday become standard fare throughout the fleet. But for now, it's pretty much limited to the green market.

Within that green market, several carmakers are incorporating greener plastic. Toyota leads the pack with its Eco-Plastic, derived from several plant sources including corn, sugarcane and kenaf fibers [source: Toyota]. The 2010 Prius uses this plastic in several interior components, including door trim, seat cushions and scuff boards. The Lexus HS 250h also uses Toyota's Eco-Plastic in its interior. Compared to regular plastic, this bioplastic is estimated to release 20 percent less total CO2 over the life of the car [source: McCarthy].

In most cases, automotive eco-plastic is combined with traditional plastic to make car components, so its environmental impact is mostly realized when you look at the bulk effect of mass production, not on a case-by-case basis. However, in 2003, Toyota introduced the Raum in Japan, a car containing some interior components made from 100-percent eco-plastic [source: Vaughan]. So we know it's possible.

Toyota and Lexus aren't the only ones in the eco-plastic race. Most of the major players are looking to score in the green arena. Mazda is researching a biomass-based plastic that it hopes to start using by 2013 [source: ThomasNet]. DaimlerChrysler has for some time been using natural fibers like hemp, flax and coconut to make interior plastics more renewable, and in 2005, the company won an award for its use of banana fibers in exterior plastics [source: Daimler]. Ford has created a soy-based foam that debuted in the seats of the 2008 Mustang [source: IW].

All this competition for eco-cred can only help the environment. In an apparent bid to take it up a notch, Toyota is looking to work seaweed into the plastics profile of its ultra-green, futuristic 1/x hybrid -- a "post 2020" car that may prove to be well worth the wait [source: McDonald].

For more information on eco-plastics, hybrids and related topics, look over the links on the next page.