Are they legal? Are they even OK? 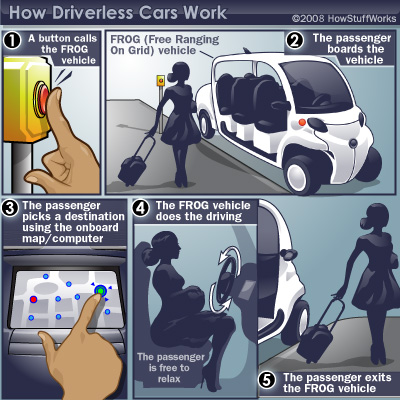 Semiautonomous cars, in the lingo of the day, are legal for testing only -- not for private owners -- in four places so far: California, Nevada and Florida, plus the District of Columbia. (Nevada added an infinity sign to the license plates of semiautonomous cars.) The National Highway Traffic Safety Administration (NHTSA) released some suggested guidelines, which is as non-legally binding as it sounds.

Not only will new laws have to be drawn up, but our old laws will need some serious rewording, too, since people in the dark ages of driverless cars (any year before this one, really) assumed there would be a driver with his or her hands on the wheel and feet on the pedal -- and not just for show. New York law says straight-up that you have to have a hand on the steering wheel while the vehicle is in motion. Chauffer and its semiautonomous friends do not have hands.

There's even a Geneva Convention on Road Traffic, which the U.S. Congress ratified in 1950. This is when cars had fins, not rotating lasers and lidar. People back then did not anticipate a car that could drive itself. Yet they did anticipate those flying cars. They were wrong about a lot of things. Anyway, according to this Geneva Convention, the driver of any vehicle, whether it's a car or a horse-drawn cart, has to have control. And they do assume the driver is a person, not K.I.T.T. The European Union takes this quite seriously -- as of now, a human driver must be in control of a vehicle at all times. No robots allowed.

As the technology progresses, the legal issues will follow. If your semiautonomous car's laser array skips over a pedestrian while you snooze and your car hits him, are you at fault? Is Google at fault? Is the lidar manufacturer? Is the pedestrian? Because he really should have been staring at your car, in awe of its futuristic capabilities and well-aware of its location -- at least enough to not find himself underneath it. Only time will tell. But it probably won't be the pedestrian's fault he wasn't sufficiently amazed by your car.