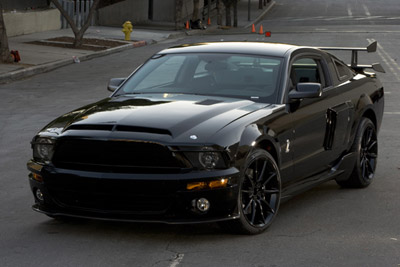 Hollywood has recently taken a liking to various 1980s television series with a strong emphasis on cars. In the summer of 2007, director Michal Bay took the children's cartoon series "Transformers" and updated it as a live-action blockbuster. The film, about computer-powered cars with the ability to change into anthropomorphic battle machines and fight evil forces, was a big success, grossing over $700 million worldwide at the box office [source: Box Office Mojo]. The flashy special effects and movie stars were exciting, sure, but audiences most likely came to see the movie for the cars, each with its own personality and special attributes.

Television network NBC used a similar formula when it brought "Knight Rider," the iconic detective show from the '80s starring David Hasselhoff, back to the small screen with a two-hour made-for-TV movie based on the original series and an updated series of the show to network TV in the fall of 2008. Hasselhoff wasn't the only star of the show -- in fact, some might say his non-human counterpart was the real star. In the story, K.I.T.T. (Knight Industries Two Thousand) is the supercar Hasselhoff drives to fight crime. A black, two-door Pontiac Trans-AM, K.I.T.T. could drive around on its own, talk back to Hasselhoff's character, Michael Long, with snappy one-liners and provide logical detective work thanks to artificial intelligence.

The new "Knight Rider" updates the original series with a new story, new characters and more spectacular effects. K.I.T.T. also gets a makeover -- or three, technically. Instead of a Pontiac, K.I.T.T. is now a souped-up Ford Mustang GT500KR, and the car can morph into three different versions -- Hero, Attack and Remote.

With the Internet and DVD box sets keeping the cult status of "Knight Rider" alive, you can be sure there's a lot of debate and controversy over the choice of a Mustang. In this article, we'll see what the new version of the beloved K.I.T.T. can do and compare it with the original.